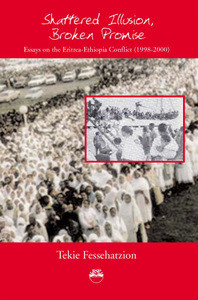 When the government of Mengistu Hailemariam was overthrown and replaced by a new government headed by Prime Minister Meles Zenawi in 1991, Eritreans had hoped that there was finally a government in Ethiopia that had foresworn hegemonic ambitions towards Eritrea. The war (1998-2001) shattered this illusion. Eritreans had also hoped that with the conclusion of the war of independence and a presumably friendly new government in Ethiopia, Eritrea would focus on rebuilding political, social, and economic institutions. The war derailed such hopes.

By carefully documenting the events of the war between Ethiopia and Eritrea, the author unravels the complexity of the dispute and places it in the context of both a regional and international political dynamic.

“Written by one of the most passionate Eritrean patriots, the essays in Shattered Illusion, Broken Promise inspired a collective sense of responsibility and self-sacrifice among Eritreans in the Diaspora. Tekie’s essays galvanized Eritreans abroad to double their efforts in support of their fighting compatriots against the Ethiopian aggression. These essays reflect and animate the people's sacrifice for a just cause almost in the same way the pen of Ato Woldeab and the political leadership of Ibrahim Sultan inspired the Eritrean independence movement earlier. For students of history this collection is of particular importance for it shows the depth and continuity of Eritrean nationalism. His intimate knowledge of the country and its history makes this collection relevant to laymen and scholars alike."

-Jordan Gebre-Medhin
Author of Peasants and Nationalism in Eritrea

ABOUT THE AUTHOR
TEKIE FESSHATZION is Chair and Professor of Economics at Morgan State University. He is the author of From Federation to Anexation: Eritrea, 1950-1962. He edited the special issue of Eritrean Studies Review on the Eritrea-Ethiopia Border War. He was a member of the Eritrean Constitutional Commission.