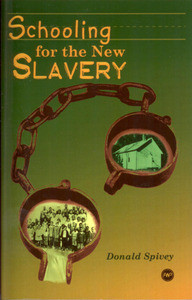 Schooling For The New Slavery: Black Industrial Education, 1868-1915 is one of the most damning and compelling critiques of the New South, Northern benevolence, and the race leadership of Booker T. Washington since W.E. B. Du Bois’s The Souls of Black Folk.

“Spivey has written a provocative book. … Specialists in the field (Afro-American and American social and economic historians) will find a lot to discuss in this controversial book”

“Spivey’s work is an interesting discussion of the various elements that operated in support of industrial education. He draws heavily upon newspapers, archives, and manuscript collections of the institutions involved.”

“Spivey has produced a thoughtful book that will stimulate discussion and should be of interest to scholars of black history and professional educators for use at the undergraduate and graduate levels.”

“In this brief, well-written book, Donald Spivey presents an arresting case for industrial education in the post-Civil War South as being a major force in teaching blacks to remain subservient. …strongly recommended to anyone concerned with the development of post-Civil War black education.”

About the Author:
DONALD SPIVEY is Professor of History at the University of Miami. Among his other books are: Fire From The Soul: A History of the African-American Struggle (2003), Sport in America: New Historical Perspectives (1985), and Union and the Black Musician: The Narrative of William Everett Samuels and Chicago Local 208 (1984).