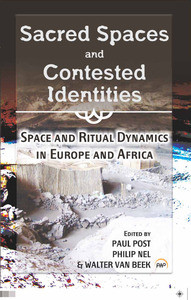 The fundamental changes in society and culture are forcing us to reconsider the position of sacred space, and to do this within the broader context of ritual and religious dynamics and what is called a ‘spatial turn’. Conversely, sacred sites are a privileged way of studying current cultural dynamics. This collection of studies on sacred space concerns itself with both perspectives by exploring place-bound dynamics of the sacred in Africa and Europe.

Central concepts in this connection are identity and ownership, and contestation and conflict. Cultural dynamics, identities and ownership, and contestations are very much interrelated. The essays and cases show that, via these contested fields and the contested grounds connected with them, identities are always at stake. One can think here of identities in the sense of local, regional and national delineations and profiles of group cultures in contact. One can also think here of the religious interactions that are currently taking place in religiously pluralistic Africa and Europe. Identities, however, are always nested in several echelons, and, especially in the non-book religions, sacred sites with their rituals may enhance cohesion at any level of society, while at the same time bonding and separating groups.

Paul Post studied Theology, Liturgical and Ritual Studies and Christian Art in Utrecht and Rome. He is Professor of Ritual Studies (School of Humanities, Tilburg University (NL)). His main interests are in the field of current ritual dynamics, religious popular culture (pilgrimage), with a focus on space/place and ritual, on which he has published books and articles. Recent co-edited books: Holy Ground: Re-inventing Ritual Space in Modern Western Culture (Peeters: Leuven 2010) and Sacred Places in Modern Western Culture (Peeters: Leuven 2011).

Philip Nel is a scholar of Ancient Near Eastern and Afro-Asiatic Studies and taught at the University of the Free State, South Africa, from 1975 until 2009. In 2007 he established a Centre for Africa Studies at the same university and is currently an associate researcher of this Centre. He published extensively on Ancient Near Eastern literature as well as African culture and indigenous knowledge systems (e.g. Volume Editor of Indilinga, 4/1 2005).

Walter van Beek, an anthropologist, studied the Kapsiki in North Cameroon from 1972 onwards, and the Dogon of Mali from 1979, both till the present. He published extensively on both groups, the last major work The Dancing Dead. Ritual and Religion among the Kapsiki/Higi of North Cameroon and Northeastern Nigeria, (Oxford UP 2012). He is Professor of Anthropology of Religion (School of Humanities, Tilburg University) and is also interested in the effects of tourism on local African populations.