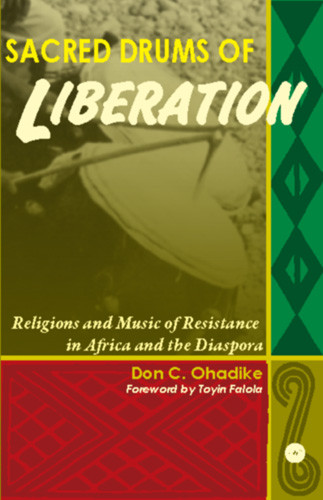 "Sacred Drums of Liberation" chronicles the struggle for peoples of African descent to overcome slavery, colonialism, and neo-colonial hegemony. Tracing resistance movements from the colonial period into the 20th century through music and religion, the pursuit of freedom and the practice of resistance extend beyond the borders of Africa into popular culture in the United States, the Caribbean, and South Africa. Music and cultural resistance movements from Maji Maji, Mau Mau, Rumba, Samba, Capoeira, Steelband, Rasta, Reggae, Blues, Hip Hop, and Rap are all evaluated as resistance and a search for equality. Through exploring a variety of cultures, "Sacred Drums of Liberation" illustrates how Africans responded to racism and oppression around the world. Ohadike crosses a multitude of eras and locations but the theme of resistance to oppression through religion and music echoes drums of liberation into the present.

ABOUT THE AUTHOR
DON C. OHADIKE, former director of Cornell University's Africana Studies and Research Center (ASRC), passed away on August 28, 2006. He was 63. Ohadike joined the ASRC as an assistant professor in 1989, and served as associate professor since 1996 and as director of the center from 2001 to 2005. Prior to joining Cornell, he held academic appointments and prestigious visiting and postdoctoral fellowships at several institutions, including Stanford University in 1988 and Northwestern University in 1988-1989; University of Jos in Nigeria as chair of the History Department from 1984 to 1988; and as lecturer at the School of Humanities, University of Port Harcourt, Nigeria, from 1977 to 1979. Ohadike authored several books and articles in scholarly journals. His published books include: "The Ekumeku Movement: Western Igbo Resistance to the British Conquest of Nigeria, 1883-1914" (Athens: Ohio University Press, 1991), "Anioma: A Social History of the Western Igbo People" (Athens: Ohio University Press, 1994) and "Pan-African Culture of Resistance: A History of Liberation Movements in Africa and the Diaspora" (Binghamton: Institute of Global Cultural Studies, Binghamton University, 2002). An indication of Ohadike's highly regarded status in the field of Igbo history and culture was the invitation by Heinemann, the original publishers of the famous "African Writers Series," to write the introduction to the 1996 edition of Chinua Achebe's masterpiece "Things Fall Apart."