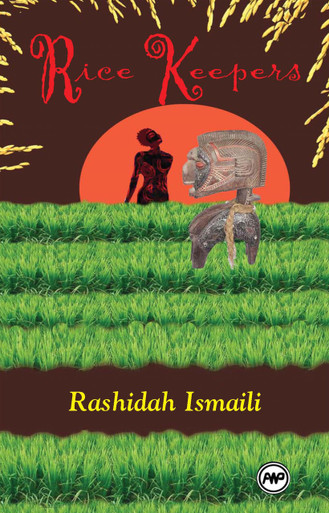 Rice Keepers is a full-length play in eleven scenes, with ten characters, two of whom double up, and a dancer. Set in the Nimba, a village in a Guinee Coast country, the play centers around historical events of the past, particularly a massacre in the village of Nimba where the farmers are most noted for their rice culture.

The Keeper of the Seeds, a female elder, who refuses to sell or give rice to the French during WW2, is beheaded as she attempts to protect the rice harvest and seeds. Her head is never found and because tradition calls for all to be returned to The Creator whole, her assistants continue the ritual of growing rice but never stop grieving for her.

The scene shifts to a more recent date in Nimba where a civil war rages and the current Rice Mother is living as a displaced person in the city. By chance, she meets the director of refugees, also an African translator, who as a young soldier came to the village forty years earlier to demand the rice harvest for the soldiers.

The play deals with colonialism, betrayal, tradition, gender issues, impotence and continuity. It is woman-centered because rice-growing is female work, and the duty of the Rice Mother is to maintain the seeds for planting, conserving of rice for food and locating the sites for growing rice. The ritual of dance and the mask are important elements in the play, especially because the mask embodies the past and predicts the future.

ABOUT THE AUTHOR
RASHIDAH ISMAILI is a writer of short stories, plays, and poetry. She is widely anthologized and has four collections of poems. She has also written plays which have been performed nationally and internationally. She served as associate director of the Higher Education Opportunity Program at Pratt Institute for fifteen years and now writes full time and conducts workshops, writing seminars, and lectures.