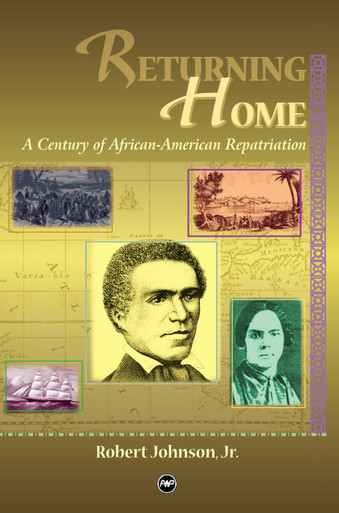 Returning Home is the first comprehensive analysis of repatriation movements in the nineteenth century. It begins with a review of Paul Cuffes journey to Sierra Leone as an entrepreneur in 1815 and ends with Bishop Henry McNeal Turner and the A.M.E. Churchs to promote repatriation efforts as reparations for slavery. The book chronicles the lives of nationalist thinkers and activists such as John Brown Russwurm, graduate of Bowdoin College (1826), founder of the first Black newspaper: Freedoms Journal and Governor of Cape Palmas Colony, Liberia.

The book views the Haitian Revolution as the genesis of African-American nationalism in the nineteenth century and assesses the British colonization experiment in Sierra Leone and its impact upon American colonization efforts. The non-African controlled efforts are analyzed through the organizational structure and ideological perspectives of the American Colonization Society and its chief supporters: northern industrialists and southern plantation owners. Furthermore, conflicting views on repatriation are critically assessed through the writings and career choices of free Africans who elected to repatriate to sections of Africa other than Liberia and Sierra Leone, or who elected to settle in Canada or the western states. Some of the other topics considered are: The African Nationalist Ideology of Edward Wilmot Blyden and African-American Women and Repatriation.

Returning Home will be the only text available for the college and university audience that surveys all of the major movements and personalities involved in the repatriation movement during the nineteenth century. For scholars and activists in the African diaspora, Returning Home will be the text to turn to for information on repatriation: the ultimate expression of African nationalism.

ABOUT THE AUTHOR
ROBERT JOHNSON, JR. is Chairman and Associate Professor of Africana Studies at the University of Massachusetts Boston, a playwright and attorney. He has published extensively in the field of African-American history, most notably the books: Race, Law and Public Policy: Cases and Materials on Law and Public Policy of Race, Second Edition; Shona (with Gary N. Van Wyk) and Why Blacks Left America for Africa: Interviews with Black Repatriates, 1971-1999.