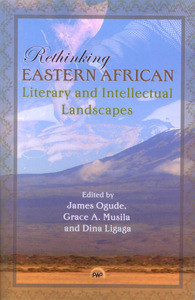 This book brings together diverse voices, genres and intellectual trajectories in an attempt to reflect on the state of production of, and engagement with, Eastern African literary cultures. The book re-visits established intellectual debates and canonical texts, while simultaneously offering a forceful engagement with popular arts and performance; particularly the manner in which genres such as drama, music and new media offer important insights into everyday life in the region. At the core of these essays is Eastern Africa’s engagement with the legacy of colonial modernity, which remains a major influence on the region’s artists. The book also speaks to rich and complex sources of Eastern African cultures and how these continue to be negotiated through multiple currents, both local and transnational. The essays traverse layered cultural landscapes and intellectual traditions – pointing to how discourses rooted in past traditions and born out of Eastern Africa’s search for aesthetic affirmation of the self, continue to be entangled with its contemporary poetics, albeit in new ways. Ultimately, this collection of essays points to how Eastern African cultural productions could offer a useful template for crystallizing the region’s elusive uniqueness, while acknowledging the heterogeneity and tensions that undermine any attempts to fix it as a stable cultural landscape.

“This book gathers brilliantly written, erudite, and incredibly rich discussions of the various facets of contemporary East African literary cultures. The greatest strength of the collection lies in the fact that each writer places the materials under analysis in the context of a long tradition of African literary production, academic debates, and postcolonial scholarship. The essays are not only a thrill to read, but they will also be of great value to scholars of African and postcolonial literatures across the globe seeking to appreciate the shifts and continuities in the region’s culture of writing.”