RETHINKING AFRICAN DEVELOPMENT: Toward a Framework for Social Integration and Ecological Harmony, Lual A. Deng 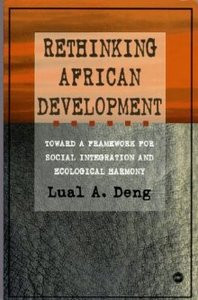 RETHINKING AFRICAN DEVELOPMENT: Toward a Framework for Social Integration and Ecological Harmony, Lual A. Deng

This book is a critical review of the theory and practice of development in Africa during the period 1965-1994. The author identifies six leading issues in African development: economic reform; democratization; environment degradations; poverty reduction; indebtedness; and civil strife. By way of addressing these leading issues, Dr. Deng calls for the formulation of an African model of sustainable development, which would ensure consistency between development policy and African thought, heritage and institutions. Deng proposes an integrative African model of sustainable development, which consists of four key elements-consensual democratic system of government; agriculture-led economic growth; social integration; and ecological harmony. He argues that one has to understand the political economy of African traditional societies in order to appreciate the nature and behavior of states rendered to operate under the consensual democratic political system.

He concludes the book with great optimism: "...inspite of the complexity and resource implication of the six leading issues in African development that are likely to dominate Africa's policy agenda in the 1990s and beyond,...there is a good chance for the integration of African economies, which would in turn lay the foundation for Africa's renewal and eventually lead to sustainable development."