RESISTANCE, INSURGENCE, AND IDENTITY: The Art of Mari Evans, Nelson Stevens and the Black Arts Movement, by Robert L. Douglas 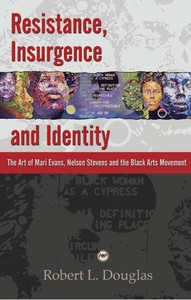 RESISTANCE, INSURGENCE, AND IDENTITY: The Art of Mari Evans, Nelson Stevens and the Black Arts Movement, by Robert L. Douglas

Resistance, Insurgence and Identity: The Art of Mari Evans, Nelson Stevens and the Black Arts Movement is an inquiry into how art was used to express the discontent and aspirations of Black America during the turbulent sixties and seventies. Following the assassination of Dr. Martin Luther King Jr., many African Americans became more convinced that the strategies of the Civil Rights Movement were not enough to meet their needs nor deal with the increased hostility of white America. Thus, Black America shifted its interest from the Civil Rights movement with its emphasis on integration and equality to Black Liberation with its emphasis on nationalism, self-determination and separation, socially and culturally.

As sensitive members of the black community, some black artists decided to join the struggle, in what came to known as the Black Arts Movement. Larry Neal defined the Black Arts Movement as being “radically opposed to any concept of the artist that alienates him from his community. Black Arts is the aesthetic and spiritual sister of the Black Power concept. As such, it envisions an art that speaks directly to the needs and aspirations of Black America. In order to perform this task, the Black Arts Movement programs a radical reordering of Western cultural aesthetics. It proposes a separate symbolism, mythology, critique and iconology.”

The distinctive visions that unite the art of Mari Evans and Nelson Stevens exemplify the spirit of achievements and self-determination, consciously or not, that links them to the Black Art Movement and thereby the Black Liberation Struggle. This inquiry examines how Mari Evans and Nelson Stevens’ ethos, fashioned by their lives and certain influences, causes each to create the unique messages and visions that became their personal resistance, insurgence and defense against the insidious ideological effects of racism.  Their inimitable creations are cultural contributions inscribed with an ideology of a love for black people with whom they share an African identity.

ABOUT THE AUTHOR
ROBERT L. DOUGLAS is a painter and sculptor as well as a scholar. He served as chair of the Pan African Studies Department from 1989 to 1995 at the University of Louisville. His first book, Wadsworth Jarrell: The Artist as Revolutionary, was published by Pomegranate Press in the summer of 1996.