RENTIER STATE IN AFRICA: Oil Rent Dependency and Neocolonialism in the Republic of Gabon, by Douglas A. Yates 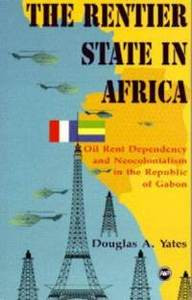 RENTIER STATE IN AFRICA: Oil Rent Dependency and Neocolonialism in the Republic of Gabon, by Douglas A. Yates

This is a detailed study of the political and economic condition of the Republic of Gabon, focusing on the years of the oil boom (1975-1985). Because its population is small and its oil exports significant, Gabon is able to maintain the highest per capita income figures in all sub-Saharan Africa. Because of its small size, however, the country is a low "absorber" of its oil rents and is in a state of economic stagnation. These economic troubles have strengthened Gabon's dependency on France. The author vigorously explores the hypothesis that the Gabonese economy is "rentier"-reliant on external rent - and evolving into an allocation state. Contextualizing this proposal, he examines the political history of Gabon, from the 15th century through systems of slavery and French colonialism. He probes the structural problems intrinsic to the input-output imbalance of the rentier economy which are reflected in the class structures and politics. The rise to power of Leon M'Ba and the Foccart Network leading to the Bongo regime are just a few of the key elements examined. Reverberating through this book, with all its concrete, factual information about past and current economic conditions, is the stark realization that the Republic of Gabon - while technically "liberated" from colonial rule - is anything but free.

ABOUT THE AUTHOR
DOUGLAS ANDRE YATES, Ph.D., is a political scientist who specializes in African Studies. He received his Ph.D. from Boston University in 1995, where he was a teaching fellow in comparative politics and international relations. An active member of the African Studies Association, and the Group de Rescherches sur L'Afrique Francophone, he lectures at universities in both France and the USA.