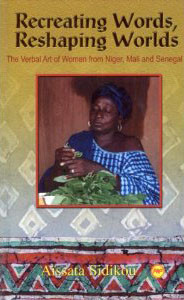 This ground-breaking book examines the verbal art of women from three Sahelian societies. It relates West African women’s voices to a broader literary, political, and cultural context and succeeds in crossing traditional disciplinary boundaries. In her book, Sidikou argues that through verbal art women create a ritual space that serves as the locus of both their creativity and their efforts to negotiate power as well as to affirm their own selfhood. By offering a new way of approaching oral literature in West Africa, this study re-thinks verbal art by and about women. It also debunks assumptions about African women by suggesting a re-vision of what has been written about them.

This significant and unique study will have a tremendous impact on research and teaching in general and will make a strong contribution not only to African studies, but to cultural studies, feminism, theory, and education.

Axssata G. Sidikou was born in Niger and earned her Ph.D in Comparative Literature at The Pennsylvania State University in 1997. She was a lecturer of African Literature, French and Hausa in the Department of French at Barnard College and Columbia University, New York, and is presently teaching at Princeton University.