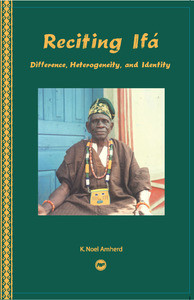 This book generates a critical Ifa poetics and analysis that emphasizes Ifa as a philosophical heritage that privileges heterogeneity of discourses, texts, and worlds. The book foregrounds and elucidates the practices and explications of Ifa thinkers (individual babalawo and their personal elaborations and explanations) and achieves this by its detailed transcription, translation, and analysis of an actual divination that took place in Ijebu Remo, Nigeria. Therefore, the book urges returning Ifa to its actual sites of recitation and contextualization in situ where the performances are bound up in specific locations, their pasts, the participants (both human and non-), diverging interests, and the differences of style and language that reside in every performance. Many works display and/or refer to Ifa “poems” in order to appeal to Ifa’s authority thereby supporting their arguments and theoretical considerations on other subjects but overlook the performer, the uniqueness of his recitation, and the context of its performance. What is missing is a critical theory for the justification of such use. This book fills this gap by linking apparently transcendent Ifa texts to the real people who recite them within the horizon of still living heritages.

A fundamental question for African Philosophy, asked by thinkers such as Wiredu, Towa, Serequeberhan, and others, has been: how can a modern philosophical discourse arise that is rooted in the continuum of cultural heritages? Discourse in oral cultures must be seen as simultaneous with performance so that the orature recitation by a specialist is in fact the intellectual elaboration by an individual thinker in an indigenous mode of heritage. Because this book foregrounds the contextual recitations of texts by specific individuals, it suggests that this goal is already present but must be brought out through developing a recognition of the discursive strategies of oral performances mobilized by individuals who therein express their unique knowledge and understanding. This book focuses on a particular diviner with analysis of his divination performance, juxtaposed and compared with other performances by the same diviner at other times, different diviners in the same town, and different diviners in other places. The book, therefore, explores epistemological and ontological concepts and activities that arise through reciting texts in ritual settings and the predominance of a metonymic logic. It also considers history as tied to performance such that temporality is seen as an imbroglio of interconnected events, personae, locations, and actions.

This book challenges an uncritical reification of Ifa as a facile, static repetition of itself through time and space. Included in the book are multiple transcriptions of actual recitations by particular, named babalawo. This reveals Ifa texts as emergent performances by individual babalawo contextually incorporating, reflecting, and entangling themselves within the realities of towns, histories, Orisa, lineages, tensions, disputes, and so on, in and to which the babalawo’s recitations act. To utter Ifa texts is a form of social action by a specific individual within a unique context of circumstances and participants.

This is arguably the most scholarly work in recent years to be written on Ifa, the well known Yoruba body of ideas on religion, divination, philosophy and more. With a solid base in ethnography and recitations offered in the book, the author effectively connects detailed field research with scholarly work drawn from literature, anthropology, history, and language.
—Toyin Falola, FAH,
The Frances Higginbotham Nalle Centennial Professor
and University of Texas Distinguished Teaching Professor

ABOUT THE AUTHOR
K. NOEL AMHERD acquired his master’s degree in Anthropology and Ph.D. in African Studies from the Centre of West African Studies, University of Birmingham.

This book is the culmination of relationships he originally forged in 1995 with the diviners of Ode Remo, Ogun State, Nigeria, who performed his itefa (Ifa initiation) and expressed their expectations of him to “be a babalawo”. He continues to articulate the sophistication of Ifa epistemology, and the ways that it establishes new relevance amidst the pressures of modernity, geo-political interests, and religious conversion.