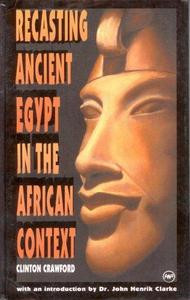 This is a timely piece which seeks to place Egypt in its true historical context. It captures the substantial, unmistakable evidence for the indigenous African origin of the ancient Egyptians. It also examines the genius behind their invaluable achievement in concretizing and codifying the hieroglyphic system of writing that they inherited from their ancestors. It explains their mastery of the arts and sciences as displayed in their monumental architectural feats. And finally it analyzes their highly organized-- not surprisingly, matriarchal-- social system which made it possible for so many of their unsurpassed contributions to be bequeathed to human cultures everywhere. Unlike conventional treatments of ancient Egypt, however, this innovative text renders the collected data accessible to layman and expert alike through its framework of suggested curriculum outlines, thus ensuring this book's usefulness to the general public as well as to educational institutions.

"Professor Crawford... has convincingly shown that art and language are weapons in a nation's cultural survival. In preparing this book with the... hope that it will be used in a multicultural curriculum, he has opened a new educational door by demonstrating the modern significance of ancient Egyptian art and language." -john Henrik Clarke, Professor Emeritus, Hunter College

"...Crawford argues that the 'curricularization' of the already popular subject of Egyptology (especially if focused on the art and language of the ancient society) would prove an indispensable and empowering course of study for contemporary American schoolchildren-- not only African American, but those from other ethnic background as well." -Keith Gilyard, Syracuse University

"Dr. Crawford cites chapter and verse as to how we can most naturally fashion the curriculum to reflect all of the diverse legacies and contributions to society and, in so doing, render diverse and sundry individual subject areas genuinely interdisciplinary... I sincerely hope that this fine work gets the broad airing it deserves. if enough educators are exposed to it, I am certain it will play an important part in energizing the studies that take place in schools across the nation." -Arthur Lewin, Baruch College

ABOUT THE AUTHOR
CLINTON CRAWFORD is an assistant professor in the Department of Languages, Literature, Communication and Philosophy at Medgar Evers College, City University of New York. Born in Guyana, South America, he specializes in African arts and languages as communication systems.