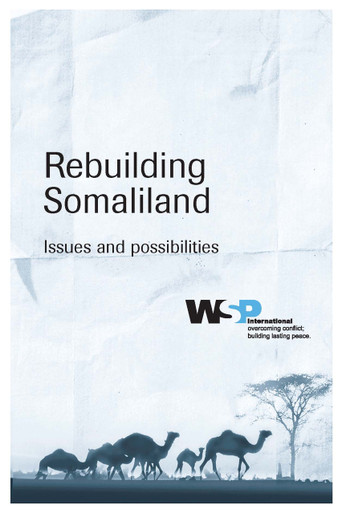 Somaliland is Africas best kept secret, according to South African academicIqbal Jhazbay. Somaliland has earned this description owing to its extraordinary achievements in the 12 years since its declaration of independence. Despite being unrecognized and almost entirely ostracized by the international community, Somaliland has, following a brutal war with Somalias now defunct dictatorship, rebuilt much of its severely damaged infrastructure, repatriated half a million refugees and removed thousands of mines from the ground. In addition, Somaliland has maintained a comparatively decent human rights record and has made significant progress towards the establishment of a constitutional democracy.

Rebuilding Somaliland: Issues and Possibilities is the fruit of an extensive research project initiated in 1998 by the former War-torn Societies Project(WSP), now WSP International, in partnership with a local institution, the Academy for Peace and Development. It aims to present a self-portrait of Somaliland and the challenges facing it at the turn of the century. This book also documents the animated, often controversial debates on the future direction that needs to be taken in such areas as:

Functioning as more than records of research and debate, more than essays on post-war rebuilding, these contributions provide a unique insight into the future that the people of Somaliland want for themselves and for their children. As such, the essays are in many ways a blueprint for Somaliland as it seeks to regenerate itself into a peaceful, mature society that will earn the respect and recognition of the international community.

ABOUT THE AUTHOR
WSP INTERNATIONAL was formerly known as the War-torn Societies Project.