RAISED HOPES, SHATTERED DREAMS: Democracy, the Oppressed, and the Church in Africa (The Case of Zambia), by Kapya J. Kaoma 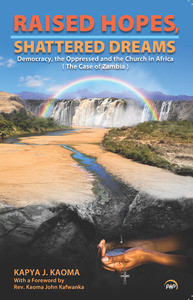 RAISED HOPES, SHATTERED DREAMS: Democracy, the Oppressed, and the Church in Africa (The Case of Zambia), by Kapya J. Kaoma

Raised Hopes, Shattered Dreams integrates political, economic and theological analysis in addressing the economic and political developments in Zambia from 1964 to 2014, and the Church’s response to them. Aside from being one of the most stable nations in Africa, Zambia is among Africa's poorest nations—with the majority living on less than one dollar a day. Although attempts have been made to address poverty, Zambia experiences “the cycle of raised hopes, and shattered dreams.” Whereas the United National Independence Party (UNIP) government raised hopes of economic prosperity and liberty, those aspirations were shattered within 5 years of self-rule.

In 1991, the return to multi-party democracy raised hopes similar to those of 1964. But these hopes were shattered. The Movement for Multi-party Democracy (MMD) administration became more corrupt and repressive than the UNIP government. In 2011, the Patriotic Front wrestled power from the MMD—and raised hopes of economic advancement and liberty. Within two years, those hopes were shattered.

Acknowledging the Church’s role in politics, the book provides the theological rationale for the Church's involvement in politics, and suggests practical ways the Church can aid the democratic process, and ensure national socio-political and economic wellbeing.

“Raised Hopes, Shattered Dreams is an excellent analysis of the political, economic, social and religious status of Zambia from 1964 to 2014. The book is concise, honest and interesting to read. It is a must read for the students of political theology and other social sciences.”

“The book is intellectually insightful and theologically and politically provocative to all of us. Raised Hopes, Shattered Dreams is a kairos call for introspection at all levels of our human community.”

—William Mchombo--Bishop of Diocese of Eastern Zambia, and Albert Chama--Archbishop and Primate of Central Africa and Bishop of Northern Zambia

“A “must read” for those wanting to hear an authentic African voice writing about Africa.”

“Kapya Kaoma is a formidably original thinker. This capacity is on full display in this book as he poses creative suggestions for meaningful governance approaches in Africa. Kaoma’s incisive treatment of church-state relations particularly invites Western policy makers to rethink some standard assumptions. But any outsider interested in the African continent would greatly benefit from reading this book.”

“Kaoma’s well researched and accessible study of post-colonial church and state in Zambia puts together political theory, ethical analysis, and theological argument to explain the difficulties that have hampered development in Zambia with implications for other states. His study is not merely a dispassionate analysis, but ends with a holistic agenda from human rights to Earth care that is all the more compelling given the strength of his social analysis.”

Kapya J. Kaoma is a Zambian working in the United States as visiting Researcher at Boston University, Adjunct Professor at Episcopal Divinity School and Senior Researcher at Political Research Associates.