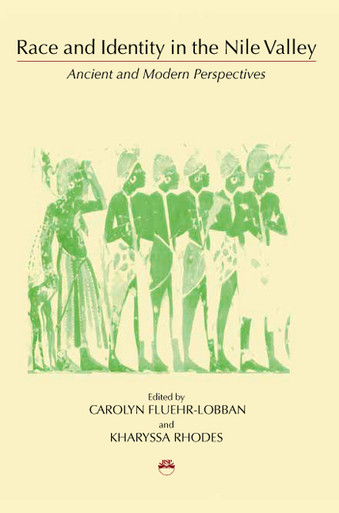 This volume pioneers the examination of issues of race and racism, ethnicity and identity in the major Nile Valley countries of Sudan and Egypt from ancient times to the present. Two major events have forced the issue. The study of the ancient Nile Valley was challenged to confront the issue of race in antiquity with the publication of Martin Bernals two-volume work, "Black Athena" (1987; 1991) asserting the Afro-Asiatic roots of Western civilization, and its most famous rebuttal "Not Out of Africa" (1996). In the aftermath of these earlier works, the question of whether ancient Egypt was black or white became the most simplistic rendering of this not so collegial debate. In this tome, a new generation of critical archaeologists and anthropologists, freed from old Orientalist and Egyptological racialist and racist ideas, have written with greater objectivity about race and representation than their predecessors.

The first part of this book contains eight original articles dedicated to an exploration of the dynamics of race in the ancient Nile Valley. These include multiple new perspectives from textual and archaeological sources, as well as reprinting Anténor Firmins chapter on Egypt and Civilization from his 1885 pioneering work of critical race thinking in anthropology "The Equality of the Human Races" (2000), only recently rediscovered.

The chronic civil war in Sudan between the Arabs of the north and the Blacks of the south has also been an event that has forced the issue of race into the discourse on the Nile Valley. Indeed, among the myriad complex issues that have fuelled this warincluding a history of slavery and the unequal distribution of political and economic resourcesa major one has been that of race, as well as religion and ethnicity. The identity of northern Sudanese by indigenous scholars has been subjected to more critical discourse in this period than in any previous one. Western scholars of Sudan and Egypt have noted the heavy hand of both Ottoman and European colonialism as providing the necessary background to the present, while critical southern and northern scholars call for urgent rethinking of these racial-hierarchical paradigms.

ABOUT THE EDITORS
CAROLYN FLUEHR-LOBBAN, PhD, works at Rhode Island College where she teaches courses in Anthropology and African and Afro-American studies. She received her Bachelor's and Master's degrees from Temple University and her PhD in Anthropology and African Studies from Northwestern University in 1973. At Rhode Island College she has received both the Award for Distinguished Teaching in 1990 and the Award for Distinguished Scholar in 1998.

KHARYSSA RHODES is a Ph.D. candidate in Anthropology at the University of Florida. She received her BA at Rhode Island College and holds an MA from the University of Colorado. Advised by Dr. Peter R. Schmidt, her Ph.D. research on Early Iron Age Uganda focuses on the integration of archaeology, historiography, and religious studies.