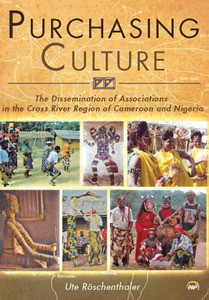 Purchasing Culture investigates the emergence of complex purchasable associations in the Cross River region of southwest Cameroon and southeast Nigeria. These associations emerged in the context of the growing transatlantic trade and were disseminated from the direction of the Atlantic coast to the hinterland. They diffused (and still continue to diffuse) transethnically across the region, ignoring linguistic and national boundaries, and forming translocal networks of owners of the same institutions. The study documents the histories of cult associations and their dissemination by purchase and sale which includes the transfer of immaterial property rights. This mode of dissemination differs substantially from that of secret societies in the West.

The peak of the associations’ expansion was at the beginning of the twentieth century. By then, they had grown quite numerous and complex. The associations are men's and women's societies, youth's dance associations and cult agencies. They differ in complexity (grades, positions, etc.), the amount of secret knowledge (secret languages, knowledge to stage a performance, etc.) and the elaboration of their performances (masked dancers, miraculous play-acting, etc.). Each type of association developed a different specialization such as the administration of justice, problem solving of clients, collecting debts, or performances at festivities, etc. The flexibility of these specializations is one reason why they are still of much importance today.

With its central focus on the purchase of cult associations, the study explores the transaction of rights in the ownership of the institutions and their performances. The purchase includes the acquisition of rights in ownership, performance, secret sign languages, and knowledge of the associations' functioning. Owners of associations have developed a local form of a copyright system with which they protect their performances. Associations form a substantial part of conferring prestige on individual members in the Cross River cultures up until the present time. They function prominently in present-day debates among the people in the villages as well as the migrants in towns.

The study contributes to the regional history of small scale societies and their pre-colonial organization of trade in West and Central Africa, to theories of associations and of the diffusion of culture; and to the role of intellectual property in the context of globalization.

37 maps and 5 tables document the dissemination histories of individual associations and 139 photographs illustrate their performances. The appendices consist of a bibliography, a glossary and an index. The study is based on research in the late 1980s, on fifteen months of field research in 130 localities in the Cross River region between 1998 and 2001, and a short trip in 2008 as well as on research in colonial and mission archives and specialized libraries.

Ute Röschenthaler's fascinating book starts from her initial surprise that in the Cross River region cult associations are bought and sold between the villages. This starting point proves to be most inspiring.  She shows how this sale of associations affects all spheres of life—from governement to marriage, from economics to religion. Thus, her vivid book seems to take the reader 'through the looking glass'—familiar distinctions fade away and alternative forms of configuration emerge. A seminal piece of work.

—Peter Geschiere, Professor for the Anthropology of Africa, University of Amsterdam

This book reveals the commercial significance of Cross River’s famous Leopard Society and other men’s and women’s associations, in Ejagham and neighboring communities in Nigeria and Cameroon. The author argues that the Ekpe (Ngbe) association was in fact disseminated through purchase from its place of origin by the exigencies of the slave trade, providing safe passage of goods throughout the region and creating a large network of trade relations among its members. In a brilliant analysis of several such associations, she reintroduces the question of the dissemination of cultural institutions not in the language of the early diffusionists but in a contemporary reading of the economy of culture.

This is an exceptionally rich and creative work of scholarship on a topic that has wide implications for our understanding of associational life and the development of civil society in West Africa. Through a detailed study of the dissemination and transformation of cult associations and agencies, we gain thought provoking insights into the contemporary development of the cultural economy and the culture of rights in this increasingly significant region.

UTE RÖSCHENTHALER lectures in Anthropology at the Goethe University of Frankfurt and the Johannes Gutenberg University of Mainz. She conducted field research in Cameroon, Nigeria and Mali. Her research interests are intellectual property, women's and men's associations, diffusion of culture, economic and media anthropology.