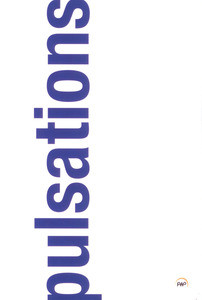 For me, the brutal forms of dictatorship we currently find on the African continent could only exist in republics vacated by custodians of the alphabet, in republics that became meaningless because writers were missing. Those republics were voided by force, because most African writers live dangerously in their country of origin and had to leave the place as their letters mean nothing in front of guns, if you think of it. But they were also voided of writers because of the tactical republicanism of most African writers of the first generation.

--from "a writer and an alphabet" by Patrice Nganangin pulsations
pulsations is a new and innovative semiannual journal of new African writing in French and English.

kangsen feka wakai, a writer from Cameroon. He currently runs the blog Africa Writing Online.
jean-claude awono, a poet from Cameroon, has published many volumes of poetry, is the president of la Ronde des poetes and runs the Centre Culturel Francis Bebey.
enoh meyomesse, a writer from Cameroon, and the author of a dozen books, including I am Speaking to the Anglophone Community of Cameroon.
cheikh ndiaye, a visual artist from Senegal, whose work features videos, installations, photographies, painting.
joanna grabski, an art historian and associate professor at Denison University.
dave southwood, a South African photographer, videographer and installator, whose work has been presented across the globe.
lionel manga, a writer and public intellectual from Cameroon, whose opinion pieces regularly appear in Le Messager.
patrice nganang, a writer from Cameroon, whose latest novel Mount plaisant was translated into German and Norwegian.
moradewun adejunmobi, is a cultural critic from Nigeria and an associate professor at University of California--Davis, where she teaches African and African American studies.
dambudzo marechera, a writer from Zimbabwe, whose prose has had a foundational influence on many African writers of the current generation.
francois woukoache, a Cameroonian filmmaker living in Rwanda, and the author of many films on the memory of traumatic historical events.

The editorial and advisory team behind pulsations includes: