PRINCE OF THE TIMES: Ado Bayero and the Transformation of Emiral Authority in Kano, by Omar Farouk Ibrahim 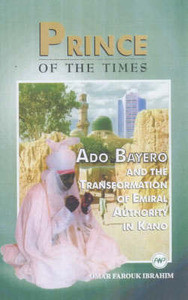 PRINCE OF THE TIMES: Ado Bayero and the Transformation of Emiral Authority in Kano, by Omar Farouk Ibrahim

“Emir Ado Bayero’s role in mobilizing support for the 1976 Local Government reform among his colleagues was instrumental to the success of the program.”

“It may interest all Nigerians to know that but for this God-fearing paramount ruler, along with a very few others, Nigeria as a country would have gone to pieces between 1966 and 1970 and also between 1993 and 1998. He is God-fearing, forgiving, patient, benevolent, contented, and peace-loving.”

“I was particularly impressed with the way he handled the crisis with the Kano State Governor, Abubakar Rimi. His reaction was simple—a dignified silence—throughout the period. That was where he demonstrated his nobility.”

“Emir Ado Bayero is unique among Nigeria’s traditional rulers. He never asks for any favor from anyone.”

Omar Farouk Ibrahim has a Ph. D. in Political Science from Rutgers University, New Brunswick, and an M. A. from Bayero University, Kano. A graduate of Government College Kano, now Rumfai College, Ibrahim was on the faculty of Bayero University from 1981 to 1990. He has been a columnist and member of the Daily Times Editorial Board, Area Manager for the Northern states and Abuja Federal Capital Territory, General Manager of Nigerpack, and Group Controller of Administration of the Daily Times Group. He is currently the Managing Director of the New Nigerian Newspapers Limited, Kaduna.