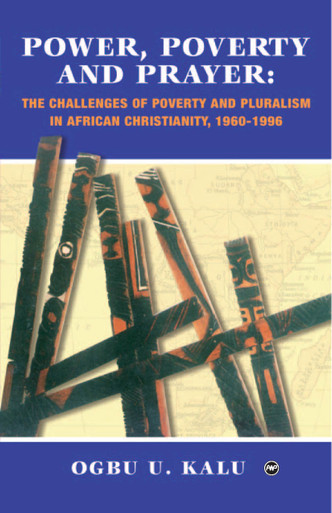 "Power, Poverty and Prayer: The Challenges of Poverty and Pluralism in African Christianity, 1960-1996" inquires into the role Christianity plays in African political and socio-economic life. Colonialism is over, but the drums of liberation are still throbbing. Christianity paved the way for colonialism, but also produced the champions of independence. What role, if any, is Christianity playing toward the Second Liberation of the continent? The author writes on a topic that is at the heart of the Second Liberation of Africa, analyzing the dialectics of power, poverty and prayer in post independence Africa in general.

The book raises some key questions in modern African church history. First, from a historiographical perspective it urges that ecology and indigenous worldview are crucial for writing church history precisely because ignored indigenous knowledge holds clues to the failure of economic and political policies, and the attendant scourge of poverty. Second, it examines how various Christian forms (mainline churches, African initiated churches, and the new charismatic movement) have responded to the darkness that has covered Africa at noontide. Third, it uses a country case study to explore the dilemma of pluralism as a power and theological concept in the midst of the monopolistic power of new African states. Finally, it draws attention to the emergence of the voice of African women theologians challenging patriarchy in the churches as one of the sources of the weak response of churches to the structures of injustice in Africa.

ABOUT THE AUTHOR
OGBU UKE KALU served as Professor of Church History for over two decades at the University of Nigeria, Nsukka. He has authored several books and articles on the history of the Church in Nigeria and throughout Africa. Kalu has variously been Visiting Professor for World Missions in Seoul, Senior Research Fellow at the Centre of the Study of Christianity in the Non-Western World, University of Edinburgh, Visiting Professor at the universities of Pretoria, Toronto, McGill, Harvard Divinity School (Centre for the Study of World Religions), and at the University of Bayreuth, Germany. Besides teaching, Professor Kalu chairs a number of Ecumenical organizations concerned with the development of the Church in Africa. He is currently the Henry Winters Luce Professor of World Christianity and Missions at McCormick Theological Seminary, Chicago.