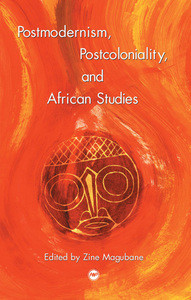 When Kwame Appiah asked the question whether “post” in “postcolonial” was the “post” in “postmodern,” he challenged the theoretical tenets of both postmodernism and postcolonial studies and opened up a space for a dialogue, which unfortunately, only a handful of scholars have continued. This volume represents an attempt by Africanist scholars to intervene and change the course of current debates, which are being carried out with little or no thought to their applicability or relevance to African studies.

The purpose of this study is not merely to present an “African” version of postcolonial studies or postmodernism or to “Africanize” their content and theory. Rather, it aims to re-situate these concepts and debates, which are at risk of being colonized by American and European academic provincialism.

This collection considers perspectives from West, South, and East Africa as well as the Caribbean. It approaches current debates from the disciplinary perspectives of anthropology, history, linguistics, literature, philosophy, and sociology while dealing with a diverse range of issues including gender, race, ethnicity, and identity.