PEACEKEEPING AS STATE BUILDING: Current Challenges for the Horn of Africa, by Leenco Lata (HARDCOVER) 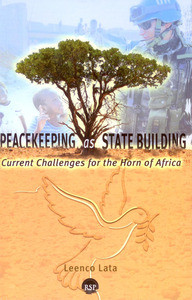 PEACEKEEPING AS STATE BUILDING: Current Challenges for the Horn of Africa, by Leenco Lata (HARDCOVER)

This book discusses how the peacekeeping operations in the Horn of Africa are involved in State construction of the either deconstruction or reconstruction variety. Both peacekeeping and state building are considerably complex processes, which are rendered even more daunting due to several factors. First, the ongoing state building initiatives are taking place at a time when the attributes conventionally associated with the state are experiencing significant shifts, thereby rendering them similar to an attempt to hit a moving target. Second, this already difficult undertaking is further compounded by the fact that conflicts among and within the state of the Horn display history of closely resonating with each other. Hence, the book argues that the ongoing case-by -case or country -by-country attempt to either shore-up extant nation-states or to oversee the emergence of smaller replicas should give way to an alternative region-wide approach to overhaul each state in order to qualitatively transform state-to-society relations. The book discusses those factors that should be articulated in order to achieve such an overhaul of the state. These are: the appropriate size of forums for political participations; the role of the positive aspects of tradition in rooting political institutions in the consciousness of grassroots communities; appropriate versions of democracy and democratic citizenship as well as how to legitimate military and security institutions in the eyes of all citizens. The overall hope is to make a modest contributions to the emerging field of theorizing state building. The book concludes by summarizing four imperative that need to be addressed for sustainable peace and stability to prevail in the strife-ridden Horne of Africa region.

ABOUT THE AUTHOR
LEENCO LATA Studies engineering in the US in the 19610s and upon returning home joined other Oromos to establish the Oromo Liberation Front (OLF). As a member of the OLF leadership, he collaborated with the present leaders of Ethiopia and Eritrea to chart the course that led to Eritrea's separation and the reconfiguration of the remainder of Ethiopia as a federation. He currently lives in Oslo and is associated with the Norwegian Research Institution, Fafo Institute for Applied International Studies (Fafo AIS). He works as a freelance analyst to political development in the Horn of Africa. HE is the author of Ethiopia State at the Crossroads ( Red Seas Press, 1999) and The Horn of Africa as Common Homeland (Wilfrid University Press, 2004) as well as many articles.