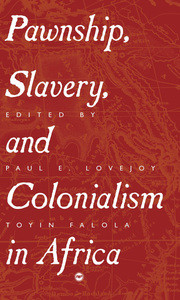 The twenty essays in this volume explore the institution of debt bondage in Africa, in which individuals were held as collateral—usually by members of the same family—in lieu of debts that had been incurred. The reliance on personal relationship to guarantee credit arrangements worked well in principal because kinship ties were protected and exploitation levels were thereby limited. Nonetheless, pawnship exposed dependants to the possibilities of enslavement in the event of default on the loan and placed individuals in precarious positions which could result in considerable abuse of original intentions.

These essays also explore how the pressure of the international slave trade, especially along the West African coast further shaped the institution of pawnship and allowed the extension of credit into the interior of West Africa. Far from ending the practice of pawnship, European colonial rule set in motion new demands on the economies and societies of Africa, assuring the continuation of pawnship well into the Depression of the 1930s.

Since the nature of pawnship was such that women and children—the most vulnerable relatives—were often offered as surety of food, money, or other goods advanced on credit, this study also contributes to a gendered analysis of work and production in Africa, demonstrating the close links between credit, servility, and gender in the history of large parts of Africa from the sixteenth to the twentieth century.

The volume includes studies of pawnship along the West African coast, in Igboland, the Niger Delta, the Kingdom of Benin, Yorubaland, Asante and the Gold Coast, East Africa, Sierra Leone and Liberia, and the western Sudan.

TOYIN FALOLA is Frances Higginbothom Nalle Centennial Professor of History
at the University of Texas at Austin and has published more than forty-five books. He is editor of two series, Studies in African History and Diaspora (Rochester) and Classic Authors and Texts on Africa (AWP). He is co-editor of African Economic History. He previously taught at Awolowo University in Nigeria and has held fellowships and visiting professorships at Cambridge University, Smith College, and York University.

PAUL E. LOVEJOY is Distinguished Research Professor of History at York
University, Toronto and holds the Canada Research Chair in African diaspora history. He is also a Fellow of the Royal Society of Canada and currently the director of the Harriet Tubman Resource Center on the African Diaspora. He won the Prix Wallace K. Ferguson of the Canadian Historical Association in 1994 for his book Slow Death for Slavery: The Course of Abolition in Northern Nigeria, 1897-1936.