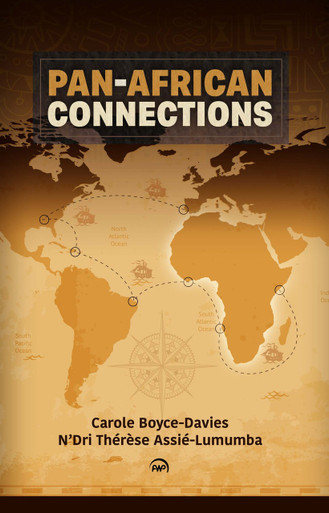 Pan-African Connections brings to the reader a combination of Reflections and Testimonies from writers, politicians, activists, colleagues; with essays on intellectual activism, the building of Pan-African institutions and the voices of women in Panafricanism. Stories abound from writers such as Ngugi wa Thiong’o and Anyang’ Nyong’o about Locksley Edmondson, who is featured here, who like Walter Rodney, lived and worked on the African continent physically, but also engaged it politically, culturally and intellectually in teaching and research.  The lives and work of these scholars embodied precisely the bringing together of African, Caribbean and African-American Studies in the intellectual arena.  Through this generation of intellectual/activists,  the rubric of Panfricanism remains one of the key areas of academic and political inquiry in Africana Studies.

Carole Boyce-Davies, is the H.T. Rhodes Professor of Humane Letters; professor of Africana Studies and English at Cornell University, the author of the prize-wining Left of Karl Marx. The Political Life of Black Communist Claudia Jones (2008); the classic Black Women, Writing and Identity: Migrations of the Subject (1994); Caribbean Spaces. Escape Routes from Twilight Zones (2013) on the internalization of Caribbean culture and a bi-lingual children’s story Walking/An Avan (2016/2017) in Haitian Kreyol and English funded by the Kellogg Foundation.

N’Dri Thérèse Assié-Lumumba is Professor in the Africana Studies and Research Center and Director of the Institute for African Development (IAD) at Cornell University. She is currently President of the World Council of Comparative Education Societies (WCCES), Chair of the Scientific Advisory Committee (SAC) of UNESCO’s Management of Social Transformation (MOST) program, and Fellow of the World Academy of Art and Science. Her authored, edited and co-edited books include: Cyberspace, Distance Learning, and Higher Education in Developing Countries: Old and Emergent Issues of Access, Pedagogy and Knowledge Production (2004); Women and Higher Education in Africa: Reconceptualizing Gender-Based Human Capabilities and Upgrading Human Rights to Knowledge (2007); Re-visioning Education in Africa: Ubuntu-Inspired Education for Humanity (2018); Education and the Development of Human Capital: Outcomes for Equity and Governance in Africa (2020).