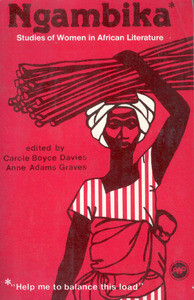 Ngambika is a Tshiluba (Central Africa) phrase whose closest english rendition is "Help Me To Balance This Load." An African woman who has to carry a heavy load often asks another woman to help her lift it onto her head while she finds the correct posture and balance to choulder the weight herself. In most cases, the load is within her capability, so she balances it herself without assistance. This balancing process is the symbolic representation of the balance between woman's emancipation and commitment to total African liberation that is at the core of this book.

The criticism in Ngambika: Studies of Women in African Literature is concerned with expanding and augmenting the interpretation of the whole body of African literary creativity. It is a concerted attempt to redress the relative inattention to women in African literary sholarship. towards this end, the editorial and ideological orientation here is not just around the works of women writers (and critics), but around African writers ranging from Buchi Emecheta and Wole Soyinka to Mariama Ba and Ngugi wa Thiong'o.