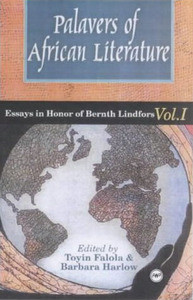 “…Lindfors translates the mystical conundrum of the ‘blind men and the elephant’ into the perspectival paradoxes and paradigms of history and geography that have so often perplexed ‘approaches to African literature’ over the last half century or so of African writings and their critical readings. Those very peripeties, however, might just as well - albeit in a different register - characterize the enormous body of Lindfors' own oeuvre. Reader and writer, editor and interviewer, biographer, bibliographer, and bibliophile, organizer and mobilizer, initiator and instigator, colleague, conferee and collaborator, intercontinental traveler, scholar and emissary, Bernth Lindfors has contributed importantly—at times well-nigh single-handedly—to placing Africa and its literature on the curricular map of the Euro-American academy….”

“The analyses and reminiscences collected in this first volume of ‘essays in honor of Bernth Lindfors,’ Palavers of African Literature, testify to the lasting and continuing fruits of Ben’s work in developing the conversations, the debates, the ‘palavers,’ of the field across boundaries of geography and discipline.”

“This large assembly of essays, as wide in range as it is rich in diversity, is a fitting tribute to the long, unwavering service Bernth Lindfors has given to African literature.”

“Bernth Lindfors is without doubt the dean of African letters in the United States.  No one has had more influence on the teaching and promotion of African literature and its criticism in North America, and his role as a teacher, literary scholar, and mentor has been felt in almost every continent where his students and colleagues have spread their wings. Palavers of African Literature and its companion volume, African Writers and Their Readers,  is a magnificent and monumental tribute to a scholar who has changed the face of African literary studies and left an indelible mark on the production and dissemination of knowledge about Africa. In celebrating Lindfors' work, the editors and contributors to these two volumes also mark the moment in which the study of African literature came of age. These essays constitute a palaver in the best sense of the word—an intellectual feast, a lively debate, and a tribute to a beloved friend and colleague.”

Toyin Falola is the Frances Higginbothom Nalle Centennial Professor of History at the University of Texas at Austin. A leading Africanist, he is the author of many books including Yoruba Gurus: Indigenous Production of Knowledge in Africa (AWP, 2000)and the co-author of Yoruba Warlords of the 19th Century (AWP, 2001). He is also the editor of the Journal of African Economic History and the editor of two series in African Studies, The Rochester Studies in African History and the Diaspora and Classic Authors and Texts on Africa.

Barbara Harlowis the Louann and Larry Temple Centennial Professor of English Literature at the University of Texas at Austin. She is the author of Resistance Literature, Barred: Women, Writing, and Political Detention, and After Lives: Legacies of Revolutionary Writing, and the co-editor of Imperialism and Orientalism: A Documentary Sourcebook. She is working on an intellectual biography of the South African activist, Ruth First.