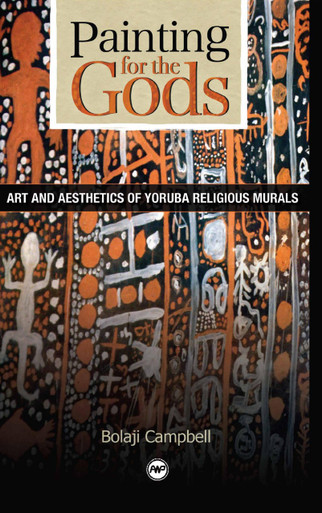 This book focuses on indigenous painting traditions found on ancestral shrines of Yoruba divinities collectively known as orisa in southwestern Nigeria. The devotional activity of orisa painting often enacted in honor and veneration of departed ancestors for healing, empowerment, and transformation continues to find expression today in the creative works of contemporary artists who have been influenced by this enduring traditional art far beyond the shores of Yorubaland.

Painting for the Gods also explores the symbolism of color focusing on the temperament and characters of the orisa. The affective qualities of color found on the shrine walls represent a means of veneration and worshiping of departed ancestors. Color employed on orisa murals as well as on wooden sculptures might provide a new touchstone for evaluating African art and suggest a model for the interpretation of other African art objects. Among the Yoruba color makes things happen. This book demonstrates the dynamic ways in which color is consciously applied thereby offering a unique lens for interpretation, grounded in the specific traditions of artistic cultures that might be applicable cross-culturally.

In Painting for the Gods: Art and Aesthetics of Yoruba Religious Murals, Bolaji Campbell sheds brilliant light on the sacred shrine paintings by Yoruba women. A little known art form that celebrates the Yoruba deities (orisha), these paintings have been overshadowed until now by widely admired Yoruba sculpture. Although Campbell grew up in a world where these shrine paintings and orisha worship existed, it was not until he was an art student that he looked at them with a fresh eye as a rich field for investigation into the connections between verbal and visual arts. He explores the aesthetics, iconography, and symbolism of this elusive and ephemeral but deeply religious mural art. Symbolism of colors and their relationships with the orisha are central themes of this study, as are the processes of periodic renewal of the paintings and associated rituals. Yourba shrine paintings, traditionally a women's art, have attracted and influenced men artists, and Campbell explores this phenomenon.

ABOUT THE AUTHOR
BOLAJI CAMPBELL is Assistant Professor of Art History at the Rhode Island School of Design where he teaches African and African Diaspora Art.