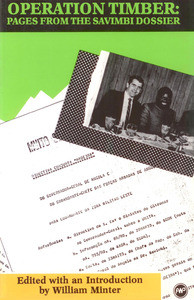 Jonas Savimbi of UNITA is South Africa's most significant African military client. He is also the beneficiary of U.S. covert aid. Despite his intimate ties with the apartheid regime, he still claims to be an authentic African nationalist who fought to end colonialism.

The documents in Operation Timber reveal that even his past has its secret scandal: covert collaboration with the Portuguese colonial army. These documents, almost all appearing here for the first time in English, are translated and introduce by William Minter, author of King Solomon's Mines Revisted: Western Interests and the Burdened History of Southern Africa (Basic Books, 1986).

"In the murky background to Angola's continuing bloodletting, the preindependence politics and international connections of the competing nationalist movements are too often ignored. Yet these antecedents are vital to any rounded evaluation of the parties in conflict. William Minter has provided a valuable contribution to out understanding of the origins of the Angolan tragedy."
-Dr. Kenneth Maxwell, Research Center on International Change, Columbia University

"William Minter has come out with another remarkable tour de force. This volume is a welcome contribution in unraveling the Savimbi mystery. The Savimbi case represents an African political phenomenon on which inordinately puts personal ambition against national interest. Savimbi's introduction of himself as the "future president of Angola," illustrates the point. He is not unique in holding a nation to ransom to satisfy his ambition. But Savimbi has become a metaphor for villainy in Africa. We must know whatever we can about him, and Operation Timber is a good beginning."
-Bereket Habte Selassie, Howard University

"The documents in this book confirm much of what was already suspected about Jonas Savimbi's adventures but not substantiated as comprehensively as William Minter has done. They constitute a strong indictment against Mr. Savimbi, whose blind ambition has pushed him to collaborate with all the enemies of African freedom and development: Portuguese, Fascists, South African racists, and other right wing forces. Minter ought to be congratulated for bringing this information to the attention of all those who care about genuine independence and human rights in Africa."
-Nzongola-Ntalaja, President, African Studies Association of the United States

"At a time when American policy seems ambarked on providing the financial support needed by Jonas Savimbi's UNITA to continue its destabilization efforts in Angola, William Minter has provides us with a timely reminder of Savimbi's political origins and character. This is a book that must be read."
-Jennifer Davis, American Committee on Africa