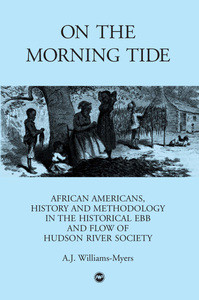 “Professor William-Myers’ engrossing essays continue his vital and groundbreaking work of bringing to light the African experience in New York in the colonial and post-Revolutionary periods. His stories teach lively lessons, and they remind us, as well, of a  too often neglected insight, that African Americans were active participants in the history of nearly all parts of the early Republic.”

“With deep passion and a commitment to scholarly integrity, A. J.  William-Myer’s On the Morning Tide bring together essays that illuminate the history and culture of Africans in the Hudson Valley from the days of the Dutch settlement to contemporary times. This pioneering scholarship opens up avenues for future research on African Americans in the Hudson Valley and lays the foundation for comparative studies with other racial/ethnic groups in the region. He addresses issues of class and gender through the use of compelling oral histories, as well as manuscript data. His anthology will make a fine companion for African American history and United States history courses, as well as Diasporan studies.”

--Lillian Serece Willaims, author of Strangers in the Land of Paradise.

A. J. WILLIAMS-MYERS is a professor of Black studies at the State University of New York at New Paltz. He is the former executive director of the New York African American Institute and holds a Ph.D. in African history from UCLA. His previous publications are Destructive Impulses: An Examination of an American Secret in Race Relations—White Violence (1994) and Long Hammering (AWP, 1994)