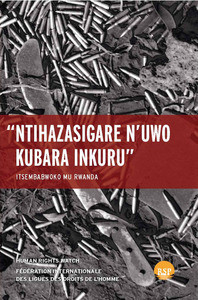 The genocide in Rwanda of 1994 was one of the most horrific episodes of late twentieth century history.  It was also a watershed event, not only directly affecting millions of people throughout Central Africa but also deeply influencing the way the world outside Africa saw such atrocities.  As such, the genocide and the events associated with it have generated a massive literature.  Yet fifteen years after its publication, the work by a team of researchers led by Alison Des Forges, Leave None to Tell the Story:  Genocide in Rwanda, remains one of the most comprehensive and authoritative  analyses of this catastrophe yet to appear.

Published by Human Rights Watch in 1999, Leave None to Tell the Story combines academic scholarship with the classical reporting of a highly respected human rights organization.  Based on her own research and that of several colleagues, Des Forges managed to bring structure and clarity to a very complex, almost overwhelming mass of data; in 789 pages, the book documents the historical background to the genocide, the political strategies and practices that led to it, the way it evolved at both the national and the local levels (providing several detailed case studies), the failure of many international actors to respond in an appropriate or effective way to this tragedy, and the confrontations among competing political and military factions in Rwanda.

Based on decades of close familiarity with the history, social organization, politics, and individuals in the country, Des Forges’s observations, marked by both passion and principle, provided some of the first balanced and well documented material on these events—events which had been misrepresented or even neglected by most outside observers and governments.  Twenty years after these catastrophic events, this book remains today the basic conceptual and empirical foundation for understanding this event of massive significance for Africa and beyond.

On the occasion of the twentieth anniversary of the genocide, Leave None to Tell the Story is being published in Kinyarwanda, for the first time.  In this landmark event, this edition makes this treasure-house of data available to Rwandans—those most involved and affected—in their own language.  It is their history, often recounted and documented by them.  Now the material collected in this volume can be returned to them.  This publication represents a major step in returning African history to the people who lived it, who care most about it, and who will continue to animate it.

ABOUT THE LEAD EDITOR

Born in 1942, Alison Leibhafsky Des Forges first arrived in Africa in 1963, to teach in a camp in Tanzania (then called Tanganyika) for refugees from the violence of 1959-61 in Rwanda.  That was the beginning of her life-long interest in Rwanda, and her life-long commitment to human rights in Central Africa.

In the late 1960s she returned to Rwanda with her husband to carry out research for her doctoral dissertation (Yale University, 1972), on the reign of Musinga, the king of Rwanda at the time Europeans were establishing colonial rule over the country; the work was published in 2011 as Defeat is the Only Bad News:  Rwanda Under Musinga, 1896-1931 (University of Wisconsin Press).  Des Forges published many other scholarly works on Rwanda, but she remained always interested in human rights issues—whether in Central Africa or in Buffalo, New York, which raised her family.

With the troubling events that preceded the genocide of 1994, she volunteered her services at the international human rights organization Human Rights Watch. She soon became a careful, well-informed, and indefatigable commentator on the events unfolding in Central Africa from 1992 until her sudden and untimely death in a plane crash near Buffalo in 2009.  She was known not only for her courageous and impeccably-balanced writings on tragic events in Central Africa, but equally for her mentorship, guidance, and encouragement of many other scholars and human rights activists, both in Rwanda and beyond.

For her work she received many honors, including the prestigious MacArthur Fellowship Award in 1999. A conference volume titled Remaking Rwanda was dedicated to her in 2011.  Even more important, Des Forges earned the love and respect of many friends and colleagues, both in Africa and in her home community, where she worked tirelessly to improve the integrated public schools attended by her children.

Her death in 2009 was a tremendous loss to family, friends, colleagues, and the world, but her principles and achievements live on in her numerous writings and in the deeds and values of the innumerable individuals whom she inspired during her lifetime.