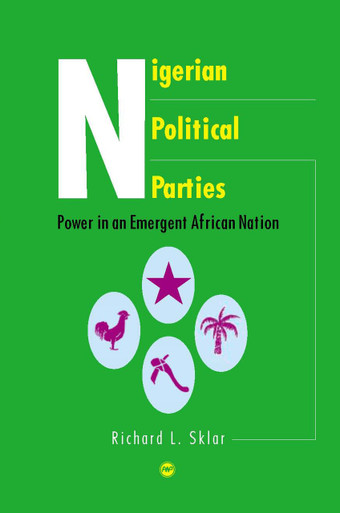 This work, originally published in 1963, examines the social bases, strategies, and structures of Nigerian political parties during the final phase of British colonial rule. It is focused on the dynamic interaction of three social forces, namely, the thrust of nationalism, the persistence of cultural particularism, and the crystallization of emergent class interests. These forces are manifest in Nigeria today. They correspond, respectively, to Nigerias assumption of a leading role in continental politics, to the tenacious claims of ethnic politicians, and to the formation of modern social classes.

Political Parties in Nigerias current constitutional order, known as the Fourth Republic, are products of the nations emancipation from military rule, not once, but twice since the demise of the First Republic in 1966. Yet, as Professor Sklar explains in his new introduction for this edition, the defining characteristics of the principal political parties of today have been shaped by the intellectual origins of the independence-era parties and their successors. In brief, the contemporary political parties have genealogies that merit careful examination by a new generation of scholars. Indeed, the republication of this volume is intended to stimulate new research of comparable empirical merit.

While the empirical, and related analytical, value of this study has been widely appreciated by students of Nigerian politics, its theoretical contribution has been largely overlooked. Empirical theorists of political and social development may wish to consider Sklars exposition of the relationship of party structure to social structure at the time of Nigerias independence, as well as his adaptation of Maurice Duvergers seminal thesis on the nature of participation in party life. Readers will discover unconventional answers to this tough academic question: Why study political parties in Africa?

ABOUT THE AUTHOR
RICHARD L. SKLAR is Professor Emeritus of Political Science at the University of California, Los Angeles, where he was founding co-chair of the interdepartmental degree program in Development Studies. He is a past president of the African Studies Association (U.S.A.) and has taught at several universities in Africa, including the University of Ibadan in Nigeria, the University of Zambia, and, as a Fulbright Professor, the University of Zimbabwe. In addition to Nigerian Political Parties, originally published in 1963 and republished in Nigeria in 1983, his published works include Corporate Power in an African State (Zambia), 1975; African Crisis Areas and U.S. Foreign Policy (coedited, 1985); Postimperialism and World Politics (coedited 1999); African Politics in Postimperial Times: The Essays of Richard L. Sklar (edited by Toyin Falola, 2002), published by Africa World Press.