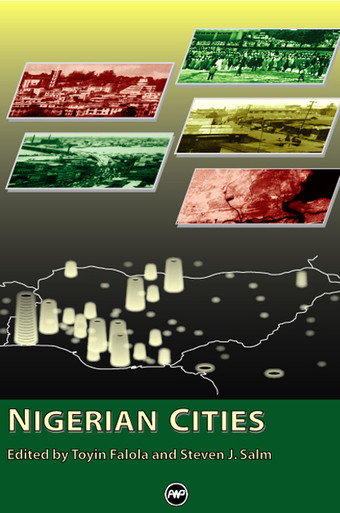 The growth of Nigerias urban population has been phenomenal, with Lagos abeing one of the fastest growing cities in the world. Rapid growth also brings problems, notably the shortage of social amenities, crime and violence. Drawing on specific examples from Lagos, Abeokuta, and Kano, among others, the book examines various issues on the management of modern Nigerian cities. The movement of peoples and goods, improving sanitation, and minimizing ethnic tension in the cities engage readers in the volume. The book addresses the concerns of scholars, experts, and policy makers. Contributors, writing mainly about the cities in which they live, combine data and practical experience to provide original analysis on the state of Nigerian cities in the last one hundred years.

ABOUT THE AUTHORS
TOYIN FALOLA is Frances Higginbotham Nalle Centennial Professor of History at the University of Texas at Austin. He has authored and edited numerous books and scholarly works including "Tradition and Change in Africa: The Essays of J.F. Ade Ajayi" and "The Journal of African Economic History" (AWP 2000). Prof. Falola has been the recipient of various awards and honors, including the Jean Holloway Award for Teaching Excellence and the Ib Khaldun Distinguished Award for Research Excellence.

STEVE SALM, Ph.D., teaches in the Department of History at Xavier University, New Orleans. He has conducted fieldwork in several West African countries, focusing on 20th century urban history and culture. He has presented research papers at major conferences, and published chapters and articles on a wide range of topics such as gender, youth, music, literature, religion and popular culture. His writings have appeared in "Africa Today" and "African Economic History," as well as various other renowned scholarly journals. Two of his recent books are "The Culture and Customs of Ghana" and "Globalization and Urbanization in Africa" (co-edited with Toyin Falola).