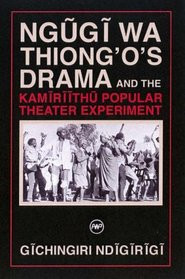 Kamiriithu has attracted considerable critical attention over the last twenty-five years. In this ground-breaking study of Kamiriithu, the author puts pressure on some of the assumptions driving earlier research. Moving from a savvy discussion of all extant Ngugi plays and their contexts, Ndigirigi then reconstructs Kamiriithu—its aesthetics, its ideology, its politics and ultimately, its theorizing—in a way that no other critic has done before. Whereas previous critics have underscored Ngugi’s attempt to fashion “the aesthetic into the oppositional” to quote from Simon Gikandi’s insightful study of Ngugi’s works, Ndigirigi shows that in the end, even though his activist theater allowed Ngugi to close the gap separating him from his subjects and audience, the activist theater was still haunted by the dilemma that Fredric Jameson finds in Ngugi’s fictional works: the author’s passion for change which has not found its agents. While recognizing that Ngugi’s self-reported “epistemological break” with English redefined his audience somewhat, Ndigirigi shows that the oppositionality of the Gikuyu language plays mattered more than the language of their composition with meaning conveyed almost as effectively by the non-verbal as it was by the verbal texts. Differentiating the actual audiences into gendered, class, religious, ethno-national and national subjects in a way that brings Ngugi’s own gender, class, ideology, ethno-nationality and nationality into sharper focus, Ndigirigi highlights the gap between the author’s privileged positions and the subjects of his representation; between the dramaturgical modeling of social change and the impediments to social change. In the end, Ndigirigi concludes, the activist theater was effective, rather than efficacious. Even so, Kamiriithu is presented as a landmark in the development of Kenyan theater, redefining its aesthetics and its politics and influencing a whole generation of theater practitioners.

Here, the reader will find the voices of the other Kamiriithu participants articulated for the first time. They engage the official Kamiriithu theatrical history in very provocative ways. With this text, Kamiriithu criticism has finally come of age.

"Professor Ndigirigi’s study is invaluable for anyone doing serious work in the fields of popular theater and postcolonial literature. He provides much needed context and depth to Ngugi wa Thiong’o’s long-praised though little-understood work in Gikuyu political and community theater. With clear insights into local linguistic, cultural and historical perspectives, Ndigirigi provides scholars and non-specialists alike with a detailed understanding of not only Ngugi’s theatrical work but also the much broader context of the society and culture that made up the Kamiriithu experience. The author optimally combines the virtually unique access afforded him in his meticulous fieldwork and archival study to ground his use of a variety of theoretical/disciplinary approaches in developing a clear critical vision, producing a rich and rewarding examination of a crucial moment in Kenyan cultural history."

ABOUT THE AUTHOR
GICHINGIRI NDIGIRIGI is Assistant Professor of Africana Studies and English at the University of Tennessee, Knoxville