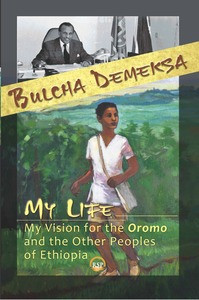 “This book titled My Life, My Vision for the Oromo and Other Peoples of Ethiopia, written by his Excellency and Honorable Obbo Bulcha Demeksa is an outstanding contribution to the Ethiopian peoples in general and to the study of Oromo history, culture, economy, political and social life in particular. It consists of twenty chapters mostly eye-witness accounts, experiences and activities of the author who had given efficient and effective civil services for long years at National and International levels in various capacities of leadership and management. The rich information contained in the book are not only exciting, interesting and well organized with sad Oromo realites but they are also authentic and credible.”

"From time to time, an inspiring book captures the insensitivity and cultural chauvinism of the Amhara and Tigrayan ruling elites towards the Oromo, their determination for marginalizing the Oromo politically and controlling their resources, and one man's efforts at making a difference so eloquently expressing the importance of establishing genuine federalism for achieving full autonomy for the Oromo within Ethiopia.  Such is ‘Bulcha Demeksa's My life, My Vision of the Oromo and other Peoples of Ethiopia. The book depicts the author's fascinating journey through various stages of his life. It is a remarkable journey filled with obstacles, indomitable human spirit that enabled the author to achieve what was beyond imagination.  One does not expect a boy from a remote village of Boji Birmaji, in Western Wallaga, who lost his father at the age of ten, becoming a famous personality on the Ethiopian political landscape as well as on the international stage.

It was a true miracle for the man, who was asked to change his “strange sounding" Oromo name to a nice Amhara one (which reflect cultural arrogance and insensitivity of some chauvinist officials of those days) to rise to such position of power so rapidly.  His success attracted the envy and jealously of some officials, who through bureaucratic infighting and intrigues forced Bulcha Demeksa to move on the world stage, serving both at the World Bank, and as a diplomat at the United Nations. The author returned to Ethiopia and sought an election to the Constituent Assembly and won with a landslide in 1994. However, the Ruling EPRDF/TPLF stole his electoral victory. Undeterred, the author became one of the founding members of Awash International Bank, which he serviced as president and first CEO. He was one of the founding members of the Oromo Federalist Democratic Movement (OFDM), which he led for six years and served as a member of Ethiopian parliament from 2005-2010, where he distinguished himself for championing Oromo language to be the second official languages of Ethiopia.”
—Mohammed Hassen