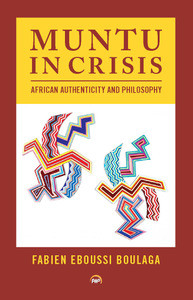 How could Muntu, that is the human being in the African condition, initiate/found a practice of philosophy that assumes and testifies to the singularity of the African situation today and assert himself as subject and object of his parole?  Under which conditions can his practice of philosophy be a praxis of liberation, and his discourse constitute itself for self, by imparting to itself, in form and content, the language of one’s own history, that is the unfolding of its historical reason or reasonable history?  These are the fundamental and existential questions at the heart of Muntu in Crisis, which is undoubtedly the most original work in the field of African Philosophy in the 20th century.

In facing these questions, Fabien Eboussi Boulaga undertakes to lay out the foundations of a rigorous African philosophical practice, free from the burdens of the rationality which, by rejecting sentiment, color, history, accident and the local, manifested itself as another name of violence or war, not only spiritual but real.  Eboussi Boulaga demounts the grammar and the rhetoric of ethnophilosophy, this thrill of the colonized subject claiming to possess philosophies and engaged in the reconstruction of a lost or denied authenticity, while losing sight of the suffered alienation.  In the same vein, he rejects the traditionalized philosophy, that is philosophia perennis, intimately linked to the history of the West and to which the Muntu must conform by renouncing his own memory, traditions and desires.  Finally, without pretending to prescribe a method, Fabien Eboussi Boulaga shows how, instead of being a dramatization of the situation of the colonized or the allegory of the power of the colonizer, the Muntu’s practice of philosophy can be a practice of emancipation and freedom, and a creative practice that assumes all his historical determinations.

The translation of this masterpiece, in which the Socratic irony and the hilarity of the African initiate, alongside the refinement of abstraction and rigorous dialectic, provides the anglophone researcher the opportunity to reconsider the development of African philosophy in the 20th century.

"This is a magnificent and original statement in the African practice of philosophy.”

—V-Y Mudimbe", Newman Ivey White Professor of Literature, Duke University, and author ofThe Invention of Africa and The Idea of Africa and editor of The Surreptitious Speech: “Présence Africaine” and the Politics of Otherness, 1947-1987.

Fabien Eboussi Boulaga was born in Cameroun in 1934.  Emeritus Professor of Philosophy at the University of Yaoundé (Cameroun), he is the author of numerous books, including Christianity without fetishes. A Recapture of Christianity (1984), A contretemps. L’enjeu de Dieu en Afrique (1991), La Démocratie de transit au Cameroun (1997), L’Affaire de la philosophie africaine. Au-delà des querelles (2011).  He is also the Editor of Terroirs. A Journal of Philosophy and Social Sciences.