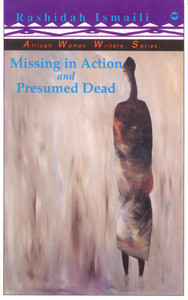 "In these brilliant poems, human life intersects with the human heart, the inner and outer cities, the bushes and the backwaters of our days and nights collide with fate and hope in rivers of song, in crystal diction, that will send goose pimples up and down your spine." -Calvin Herton

"Rashidah Ismailli's poetry sings beautifully of the whole African diaspora, from Harlem to Brazil, from an urban woman who lacks the money to pay her AT&T bill, to an African village woman who has no words for death by bombing. It is poetry of witness, preserving in its verses the slaves, the activists, the lovers and the political prisoners that the history tries to obliterate." -Charles Sugnet

"There is such beauty in Rashidah Ismailli's poetry, such honesty, such integrity... there is truth too deep down and pain as well-- the pain of being enslaved, of being possessed by one's humanity, and of being displaced!

One is bound to be impressed; and I was." -Nuruddin Farah

ABOUT THE POET
RASHIDAH ISMAILI is a lecturer in Africana Literature, and Black Psychology at Rutgers University, and also works as an Associate Director of an academic support program for minority students at Pratt Institute of Arts and Sciences in Brooklyn, New York.