MENDING RIPS IN THE SKY: Options for Somali Communities in the 21st Century, Edited by Hussein M. Adam and Richard Ford (HARDCOVER) 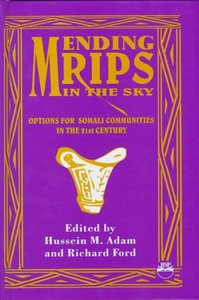 MENDING RIPS IN THE SKY: Options for Somali Communities in the 21st Century, Edited by Hussein M. Adam and Richard Ford (HARDCOVER)

This important collection deals with the following themes:

* Clan Role: at the moment, clans play a dominant role in decentralized rule. Yet many authors suggest that traditional clan roles were not to act as substitutes for central government. Are there ways in which clans and public institutions can develop complementary relationships?

* Internal Solutions: virtually all agree that long-term solutions must come from within the social, political, and economic fabric of Somalia. Yet virtually all of the contributors agree that Somalia needs extensive external assistance to rebuild itself. How can this apparent contradiction be reconciled?

* Role of Diaspora Somalis: Many chapters describe the plight of Somalis in Europe, North America, and other parts of Africa. Will they ever return and, if so, how will this be managed and what role will they play in the new society?

* Human Rights: Many authors describe unequal treatment among Somalis--women, ethnic minorities, particular subclans--during the 31 years from independence to 1991. To what extent will Somali address these issues?

* Somaliland: the former British Somaliland --now the self-proclaimed Somaliland Republic--is working reasonably well. Should the future plan suggest longer-term integration of Somaliland within a federation or confederation or should Somalia enter the 21st Century as two separate states?

The final chapter recommends how to address these and other thorny, politically sensitive issues. Scholars, policy makers, development practitioners, students, politicians, and international agency advisors will find the volume essential as discussion of the Somali people's future moves into the 21st Century.

ABOUT THE EDITORS
HUSSEIN M. ADAM is associate professor of Political Science at The College of the Holy Cross, Worcester, Massachusetts and the founding President of the Somali Studies International Association(SSIA) and Coordinator of the Fifth International Congress of Somali Studies.

RICHARD FORD is professor of History and International Development and Director of the Center for Community-Based Development, Clark University, Worcester, Massachusetts.