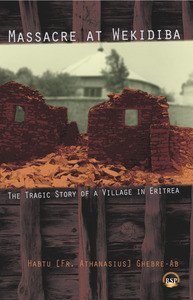 The war of independence in Eritrea and revolution in Ethiopia characterized life for much of the thirty years between 1961 and 1991. While the horrific period known as the “Red Terror” throughout Ethiopia under the regime of Col. Mengistu Haile Mariam has been relatively well documented, the atrocities and massacres that took place in Eritrea have not fared as well. Since the present leaders of Eritrea have remained preoccupied with maintaining their own political power at the expense of all else, the idea of giving priority to documenting the horrific massacres does not seem to grab hold of their imagination.

Under the veil of secrecy and away from the international media glare, massacres of immense scale were perpetrated against civilians in Eritrea during the entire period of the war of independence (Adi’brehem, Ona, Geleb, Omhager, Wekidiba, Hergigo, She’Eb…etc). Since the mass killings have touched the author’s own extended families and families of so many friends throughout the 1970s and 80s, the tragedy was never too far from his mind.

Armed with his personal familiarity of some of the massacres against the Eritrean people, Prof. Ghebre-Ab took a sabbatical leave in 2001-2002 to launch the herculean task of documenting these massacres. Although he was forced to suspend the larger project of documentation a couple of years later due to his outspoken criticism of the ruling regime, he continued the work on the massacre that took place in the village of Wekidiba in 1975 and again in 1976. He did so because he had a promise to fulfill.

As the gruesome mass-killing took place in the village of Wekidiba on the weekend of January 31-February 1, 1975, the New York Times had only this to report: “the Ethiopian Second Division began an attack about 8:30 A.M. [Saturday] against a village three miles from Asmara where guerillas may be hiding.” That was all. The name of the village was not even mentioned, much less the victims.

In the field research Prof. Ghebre-Ab conducted for this project, he interviewed nearly four dozen survivors and eye-witnesses in three continents over a period of six years to try to piece together the story of what happened to the residents of this village, lest the victims remain anonymous.

This book is not meant to fuel animosity. The peoples of Ethiopia and Eritrea, despite their political separation, are kith and kin, sharing common history and culture. They have also both suffered under tyrannical rules. And as both peoples now work for future peace and harmony, the only successful path forward is not to gloss over the dark past, but to build on a solid foundation of transparency and understanding. Massacre at Wekidibais but only a beginning step at such a necessary dialogue.

Habtu [Fr. Athanasius] Ghebre-Ab, PhD, is a professor of history at the University of Cincinnati in Cincinnati, Ohio where he has taught for over twenty years. He has also written extensively on Ethiopia and Eritrea. On July 24, 2010 he was ordained a priest of the Eritrean Orthodox Church, taking on the name of Fr. Athanasius. He is presently working on his next book: Full Circle: Coming Home to the Faith of Our Fathers.