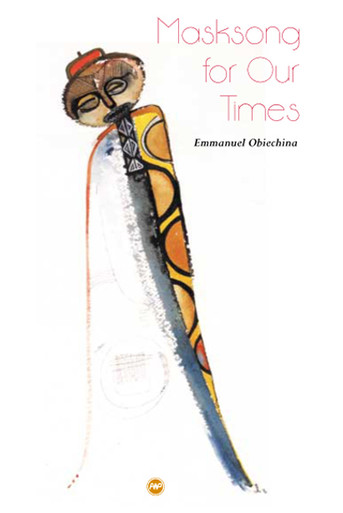 Masksong for our Times is a collection of poetry composed mainly in the masquerade idiom, which is characterized by song and chants, satirical comments and divinatory prophecies. As a central figure of the African traditional world, the masquerade speaks with the voice of an ancestral spirit, evoking the authority to say what everyone else avoids saying and the license to articulate hard, uncomfortable truths about society. By drawing upon age-old myths, proverbs, aphorisms, figures of language, and the accumulated lore and wisdom of community, it provides social commentary and moral guidance and directs public opinion and conduct.

This collection appropriates both the license and the mask-style to respond to events and situations in post-independence Nigeria (and Africa) during the turbulent 1960s and 1970s. It addresses such themes as the civil war, military incursion into politics, social corruption, violence, arrogance of power, and the degradation of the masses. These and similar themes are explored in elegiac and satiric tones and sometimes from the perspective of divinatory prophecy. Dates and general times have also been included with the poems, in an attempt to reflect specific moods and states of mind during their composition.

ABOUT THE AUTHOR
EMMANUEL OBIECHINA was born in Nigeria and educated at the University College, Ibadan, and Cambridge University. He has had an outstanding academic career as university teacher, researcher, and adminstrator in Nigeria, as well as in the diplomatic service as the director of the Nigerian Universities Office at the Embassy of Nigeria in Washington, D. C. His previous publications include Locusts, An African Popular Literature, Culture, Tradition, and Society in the West African Novel, and Language and Theme: Essays on African Literature.