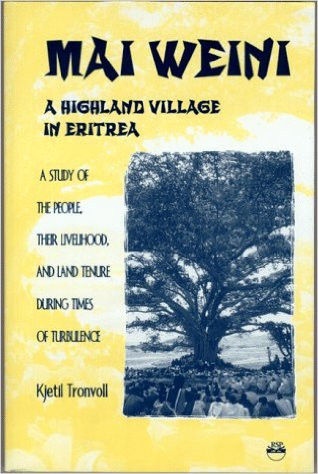 Eritrean society and traditional culture had been off limits for social anthropological research for three decades due to the prolonged liberation war, which came to an end in may 1991. Kjetil Tronvoll was the first anthropologist to enter liberated Eritrea, only a few weeks after the fighting had ceased, to carry out field work in a remote highland village of Tigrinya-speaking peasants.

This is an ethnographic account which explores the social organization of an Eritrean highland community and the livelihood of the peasants. The kinship system of the highlands is examined in detail. Analysis shows that it interlinks the individuals and the villages of the highlands into an intricate web of kinship. The lineage system, or gezauti defines, among other factors, a form of social hierarchy and the entitlement of access to land in the particular villages.

The study indicates that the systems of kinship and land tenure in highland Eritrea have provided for the social and cultural survival of the peasantry even during the disintegrating influences of famine and war. A considerable segment of the generations fled the villages or joined the liberation army, and therefore did not have any significant impact on social transformation of local environments. The youngsters that remained were easily co-opted by the older villagers into the existing social system and cultural order, facilitating the continuity of the land tenure and kinship systems.

The traditional systems of land tenure and kinship in highland Eritrea are today challenged by the new reform policies of the Eritrean government. An integral part of their development strategies is to sustain and enhance national sentiments created during the liberation war by disentangling the closely knit rural communities, dismantling their corporate character, and linking the individual citizen directly to the state apparatus in order to foster an all-embracing notion of national identity. The author argues that by radically changing the communal land tenure system and dismantling the descent structure, without creating any sustainable alternatives, the government has struck a blow at the fountain of social organization of the peasantry, the social and cultural consequences of which remain to be seen. This is committed social anthropology at its best.

ABOUT THE AUTHOR
Kjetil Tronvoll is a researcher at Norwegian Institute of Human Rights, University of Oslo. He specializes in the Horn of Africa.