LIVING IN BABYLON, by Esther Iverem 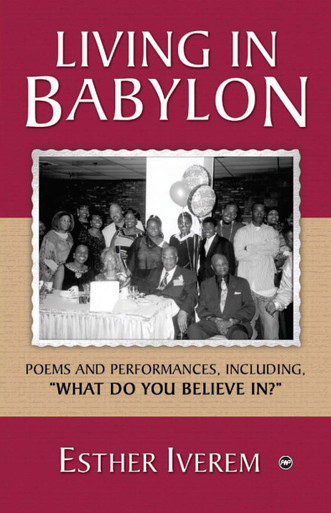 LIVING IN BABYLON, by Esther Iverem

Esther Iverems new collection of poems is a wide-ranging meditation that proves the adage that the personal is political, and the political is profoundly personal. As an active member of DC Poets Against the War, she represents a new generation of poets actively engaged in speaking truth to power in a new era of global empire. Living in Babylon combines the popularity of spoken word with the serious reflection and composition required for the times.

Esther Iverem lives where I live. If she's living in Babylon I'd better listen to her. You too. I remember when this woman told us the news in newspapers. Well, it's poetry this time. In this second volume of poems, I think she asks the most important question of the 21st century--which America Is America? Iverem teaches one how to turn pain into power and power into poetry.

In these poems Esther Iverem summons Neruda, black-eyed peas, Harriet Tubmans pistol  touchstones of resistance and hope. The poems warn that yes, there are nooses everywhere, but they also remind us of our strength, exhort us to believe that we have the power of Antonio Maceo, mounted on his horse, sword in hand. With their beauty, their humor, their brave solemnity, these poems are love reparations, manifestoes for the new century. What can we say but thank you?

ABOUT THE AUTHOR
ESTHER IVEREM is a journalist, author and poet. Her film reviews regularly appear on SeeingBlack.com, a website she founded in 2001 for the dissemination of reviews, news and commentary from a Black perspective. The Time: Portrait of a Journey Home was her first book of poems. She is a contributor to numerous anthologies, including Step Into A World: A Global Anthology Of the New Black Literature, edited by Kevin Powell and The Garden Thrives: Twentieth Century African American Poets, edited by Clarence Major. Her poem, What Do You Believe In? was broadcast internationally as part of the October 2003 March on Washington on the National Mall. A native of North Philadelphia, she lives in Washington, DC and New York City.