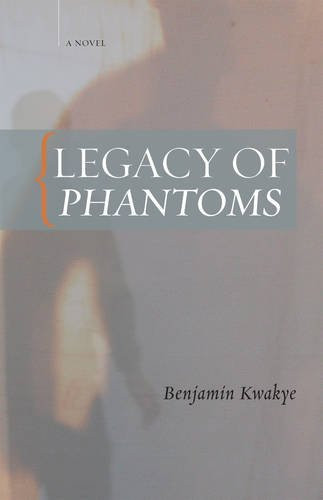 Legacy of Phantoms relates the internal battles of the twin Kakra as he struggles to come to terms with a past so jarring he is able to recall its details only in a piecemeal and sometimes disjointed manner.  As his memory navigates the complex landscape of his past experiences, Kakra comes to the realization that he must embrace the past in order to assert control of his future. The novel entails intense sibling rivalry that flirts with fratricide, shocking betrayals, joy and pain, and ultimate triumph at great cost.  It stands as a powerful metaphor of Africa’s socio-political past and present.

“Legacy of Phantoms” is ideologically richer than other novels of its kind because of its use of metaphors to identify colonialism, exploitation, capitalism and Christianity. Legacy of Phantoms has a lot to offer in fashioning a new direction for African literature. The style is engaging and the use of idioms and metaphor rich. Perhaps the greatest contribution this novel will make to the corpus of African literature is its psychoanalytical appraisal of the past through the smoky lens of the present, with the future in sight.” — Dr. Sola Adeyemi

“Benjamin Kwakye is a novelist whose genius becomes more apparent with each novel he writes.” — Prof. Vincent O. Odamtten

Benjamin Kwakye has been praised as one of the most accomplished of a new generation of African novelists. Two previous novels, The Clothes of Nakedness (1998) and The Sun by Night (2005), have won regional Commonwealth Writers’ Prize awards in both the Best First Book and Best Book categories. The Clothes of Nakedness was adapted for radio as a BBC Play of the Week. Kwakye is also the author of The Other Crucifix (2010).