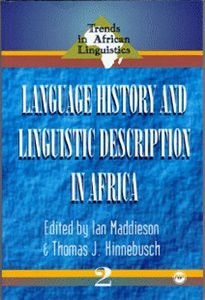 For more than a qurter of a century the Annual Conference on African Linguistics (ACAL) has provided a lively forum for the confrontation of ideas on theoretical linguistics with descriptive data on African languages.

This book represents a selection of the papers from the 26th ACAL, held in March 1995 under the sponsorship of UCLA. To mark the 40th anniversary of the anniversary of the publication of Greenberg's Studies in African Linguistic Classification, the topic of African language history and classification was made a special focus of the 1995 conference.

A third of the papers relate to this theme. These papers cover historical issues concerning the three major language families found solely on the African continent. Topics in phonetics and phonology, syntax and semantics and language planning are covered in the remainder of the volume.

ABOUT THE EDITORS
IAN MADDISEON formerly taught in Nigeria before joining UCLA as adjunct professor. His current research is focused on the phonetic description of endangered languages both in Africa and elsewhere.

THOMAS J. HINNEBUSCH has been professor of Linguistics and African Languages since 1973 at UCLA where he teaches Swahili, Comparative Bantu and Linguistics. He is the co-author of Swahili and Sabaki: A Linguistic History.