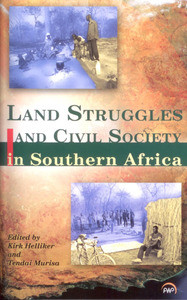 This volume is based on original field research on land struggles and civil society in Southern Africa, with chapters on South Africa, Zimbabwe, Namibia, Democratic Republic of Congo, Mozambique and Zambia. Most chapters are written by NGO and grassroots activists.

In the context of global restructuring and specific nation-building projects, rural and agrarian relations in these countries continue to generate specific forms of inequalities and marginalisation.

However, these processes of social exclusion have not gone unchallenged by rural communities, and land struggles exist throughout the region.

Many commonalities mark the contemporary agrarian question in the Southern Africa region, including market-driven processes, land concentration and food insecurity. But national particularities also exist, in part because of different colonial pasts and present development paths.

The book captures the specificity of land struggles taking place within specific countries, including conflicts around national game parks, forests, land redistribution and private titling. The richness of these accounts reflects the active engagement of the contributors in the ongoing struggles.