LABYRINTHS AND PATH OF THUNDER: Poetry, by Christopher Okigbo 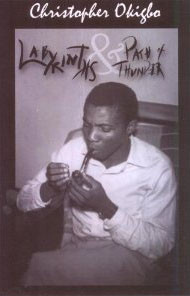 LABYRINTHS AND PATH OF THUNDER: Poetry, by Christopher Okigbo

“There is nothing in Nigerian poetry and little in any poetry I know to surpass the haunting beauty, the mystic resonance and clarity of the final movements of the protagonist’s quest in “Distances”.

“Labyrinths is an interlinked volume of poems. Christopher Okigbo was an extraordinarily gifted poet who died in 1967 during the civil war in Nigeria. It is his only published volume of poems, a meditation on everything from our origins to our obscure destinies; it is autobiographical; and it’s a piercing lament on war. I think of him as our Lorca. He belongs to that class of poet who brings out one work and that work is a world. It says everything he needed to say in his lifetime. It should be read by everyone in every country. I can’t think of him without the shadow of tears in my heart.”

“Christopher Okigbo is the most loved of African poets. The evidence may be seen in Chinua Achebe and Dubem Okafor’s commemoratory volume in which poets, painters, soldiers, professors, and various contemporaries offer their tributes of undying affection. The painters opened the floodgates with Obiora Udechuckwu’s British council exhibition in 1977. And following Wole Soyinka’s austere “For Christopher Okigbo”, almost every book of African verse in English has carried its garland of flowers.”

“Prophetic, Menacing, terrorist, violent, protesting- his poetry was all of these”

CHRISTOPHER IFEKANDU OKIGBO was born in Ojoto, in eastern Nigeria on August 1932, and died in 1967 while fighting as a commissioned Biafran army officer during the Nigerian civil war. He studied at the legendary University College Ibadan together with the other two giants of modern African literature: Chinua Achebe and Wole Soyinka.

An outstanding personality, Okigbo aspired to venture beyond the boundaries imposed by cultural, political, artistic, creative and humane limits. In the years following his tragic death, Okigbo has emerged as clearly the most significant and influential African poet, a reputation that rests on a rather slim but irresistibly powerful oeuvre as well as a penetrating and uncompromising intellect.