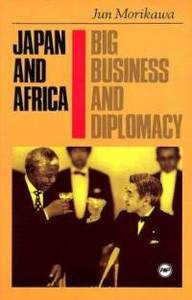 By the early 1990s Japan had replaced the U. S. as the world's largest donor of Official Development Assistance (ODA), and it is also major subscriber to World Bank Loans. Thus a clear understanding of its policy objectives in the developing world is extremely important, so all the more so given its recent efforts to enhance the profile of its relationship with Africa. Characteristically, these efforts are carried on in a way that avoids rather than seeks publicity.

In the opening chapter the author sets out the historical dimensions of Japan's relationship with Africa, especially its long involvement with South Africa going back to the end of the 19th century-- thus correcting a widespread impression that it has been a post-World War II phenomenon. In the post-1945 world, certainly, it has taken enormous strides forward, in step with Japan's growing economic power. Morikawa illuminates the breadth and depth of Japanese official and 'semi-official' contacts with South Africa, even in the height of UN sanctions, and the motivations behind the ways in which official aid has been handed out to particular sub-Saharan countries, the 'key countries' in its strategy. This has been the essence of Japan's 'dual diplomacy' with regard to Africa. This duality is the principal focus of the book.

Jun Morikawa elucidates the constellation of political, economic, and bureaucratic participators in the formulation of Japanese foreign policy. Japan And America illustrates clearly how Japan develops its policies, and how it uses corporations as an arm of government in its relations with the rest of the world. Japan's endemic racism is examined-- and at the same time anti-racism which found expression in anti-apartheid organisations and programme of "overseas co-operation volunteers'. The critical eye with which the author looks in the heart of japan's government-business nexus is bound to stir controversy. His readable narrative is supplemented by extensive documentation and statistics.

ABOUT THE AUTHOR
JUN MORIKAWA is a lecturer at the Meiji University in Japan, and former research associate at the University of Adelaide, Australia. He is the author of Japanese-language work, Japan and South Africa, published in Tokyo in 1988.