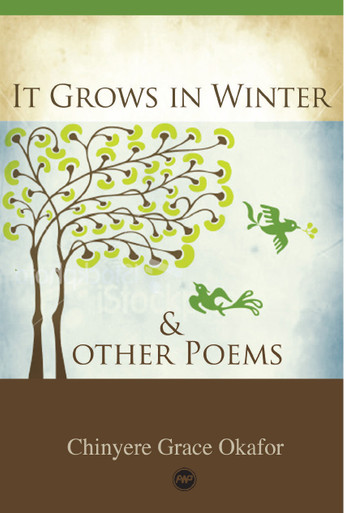 Okafor's lyricism is highly reminiscent of such nature poets as William Wordsworth, Matthew Arnold and W.B.Yeats. W.B. Yeats' 'The Lake Isle of Innisfree" shows his nostalgia for his Irish countryside whose beauty and tranquility he commemorated and celebrated in that poem. The beauty of Okafor's poems lies in its sensuality seen in the evocation of nature's beauty in the vision, sounds and smells which she captures, fused as they are with the poet's life experiences into a beautiful tapestry, a dance of life.

Among the rhythms of life, emotions of pain, mirth, ecstasy, beauty in nature's rich diversity, she sports a deep spirituality of an encompassing essence manifest sometimes as a Mother figure or plainly He/She of a functional mutuality. It is only this power that can cause growth in the cold un-welcome aridity of winter when all life hibernates. But here in this volume of poetry, the poetic Muse is un-encumbered by time and weather and indeed grows in winter.

The collection shows the interweaving of Okafors talents as a writer who is proficient in three genres of literature, and who draws from her African background, English language and Western experience. The feminist tenure of the collection seen in the characters, subjects, and their handling, reveals an inclusive kind of feminism and critique of exclusionist feminist episteme.
Carla Comellini,
Professor of English Language and Literature, Department of Foreign Literatures, Comparative and Cultural Studies University of Trieste, Italy

A colleague of mine and a deep well of feeling, Chinyere Grace Okafor, here attempts to capture Portland, Maine no less than her native Nigeria, and the political climate no less than the personal  finding as one piece puts it, the fear and wonder (in another, the furious heart) that serve as our common human denominator.
Albert Goldbarth,
Poet and Distinguished Professor of English Wichita State University, Wichita. Kansas.

ABOUT THE AUTHOR
CHINYERE GRACE OKAFOR, poet, playwright, and fiction writer teaches at the Department of Womens Studies and Religion, Wichita State University. She has a PhD in English from the University of Nigeria, Nsukka and did postdoctoral work at Cornell University, Ithaca. Her national and international awards include a Writer-in Residence Award at the Rockefeller Center in Bellagio, Italy in 1998, four Association of Nigerian Authors awards and honors in 1994 and a Global Learning Award in 2004.

Dr Okafor has authored an impressive body of literary works in various genres over the last couple of years. Among her publications are He Wants To Marry Me Again and other Stories, The Lion and The Iroko (a play), From Earths Bed Chamber (poems), Campus Palavar and Other Plays, and The New Toyi Toyi. She has also been widely published in journals and magazines.