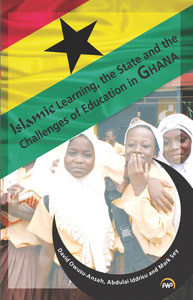 This study examines Islamic learning in Ghana over the 20th century. Informed and comprehensive, Islamic Learning, the State and the Challenges of Education in Ghana analyzes governmental attempts to introduce secular education through Islamic schools in a country where Muslims are a religious minority. The policy to bring such schools under the Ghana Education Service (GES) and standardized national examinations threatened the autonomy and proprietorship of the mallams (religious leaders) who had provided private Islamic tuition for generations.

Islamic learning provides comprehensive discussions about the implementation of the secularization program in a historical context—dating back to the colonial period but extending forward to the present.  Central to the analysis is the formation of the Islamic Education Unit (IEU) in 1987 as an agency of the GES with the mandate to introduce the secular subjects pursued under the national curriculum into the Islamic schools. This was the era of the Provisional National Defense Council (PNDC), and the presence of a Muslim minister of education and culture, Professor Ben Abdullah, who was a Muslim trained in both traditional and secular schools. Key personalities in GES like Rashid Gbadamosi, who was similarly trained, eased the transition and the fears of Islamic proprietors of Quranic schools.

The research is far-reaching. It includes extensive field interviews and statistical information to evaluate and assess the role of the IEU, reviews the outcome of the extension of the secularization of Islamic schools from the initial experiment in Northern Ghana to the rest of the country, and evaluates the impact of the national policy of a common secular education on Arabic education and Islamic religious knowledge. While Islamic school proprietors argue that the resources devoted to religious studies have declined at a time when enrollment is expanding, critics note that in the pursuit of a national curriculum, Islamic schools cannot be allowed great exceptions and privileges from the government. The book draws on relevant biographical profiles of key personalities at the center of this important story to enrich the conversation.

“This is a major study of Islamic education in Ghana, and the only comprehensive coverage of the subject from the precolonial period to the present. I cannot see any other scholars more capable than those who have collaborated on this project producing such a work.”

David Owusu-Ansah is professor of history and special assistant to the president for faculty diversity at James Madison University in the United States. His works include Islamic Talismanic Tradition in 19th Century Asante (1991) and recent editions of the Historical Dictionary of Ghana (1995 and 2005). He is currently working on said dictionary’s fourth installment.

Abdulai Iddrisu is assistant professor of history at St. Olaf College in the United States. He has authored several essays on Islamic education in Ghana.  His forthcoming book is titled Contesting Islam in Ghana: Homegrown Wahhabism and Muslim Identity in Northern Ghana, 1920-2010.

Mark Sey is faculty emeritus of religious studies at the University of Cape Coast where he taught for several years as senior lecturer of Islamic studies.  He is co-author of the series of religious and moral education textbooks for secondary students in Ghana.