IN THEIR OWN WORDS: Voices from the Middle Passage, Edited by A. J. Williams-Myers 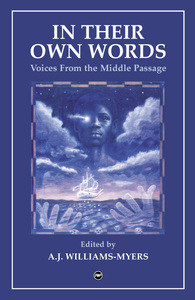 IN THEIR OWN WORDS: Voices from the Middle Passage, Edited by A. J. Williams-Myers

In Their Own Words is a gripping and haunting encounter with voices once silenced by the tragic Atlantic Voyage—The Middle Passage—reaching out across time to be heard. The book originated from a student project in the author’s class titled “Historical Terrorism Directed at African Americans and Native Americans,” taught during the Fall Semester of 2006 at the State University of New York at New Paltz. It was the final exercise of the term that put the students in a situation of feeling the long arm of terrorism, reaching out to touch them across a time barrier. The exercise was the viewing of the film, The Middle Passage, with each student writing a reaction (on the spot) of what they observed. Each was to put him/herself in the position of the Africans down in the hold of the slave ship chained to its superstructure. They had to envision the terror the Africans were confronted with as they lay in their own body excretions and that of others, with rats scurrying over them and eating at the dead, and the living, while at night having to listen to the moans of the sick and the dying, as well as the cries of women and children from the upper decks as they were being raped by the ship’s white crew. It was like psycho-drama: being able not only to understand the unknown but as well to exorcise its nebulous, frightening psychic imagery. In the book students’ reactions are introduced only by their first names or African aliases.

The book is a gripping collection of personal reactions to The Middle Passage by those who give voice to “the many thousands gone” but were unable to tell the world the horrors to which they were subjected. Voices that were once silenced by brutal death while still on board the slave ship, thrown overboard to be devoured by the schools of ravenous sharks that shadowed the ships, and/or were pulled below the surface of the waters by the mighty swirls of the Atlantic Ocean and drowned in centuries past, now reach out to us across that time barrier, having been given expression by students of the twenty-first century in their own words.

ABOUT THE EDITOR
A. J. WILLIAMS-MYERS is a professor in the Black Studies Department at the State University of New York at New Paltz. His writings include Long Hammering: Essays on the Forging of an African American Presence in the Hudson River Valley to the Early Twentieth Century (Africa World Press, 1994).