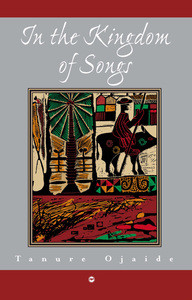 In the Kingdom of Songs, a harvest of many years (1995-2000), Tanure Ojaide brings together related, but different poetic expeditions: “In the Kingdom of Songs, “ “Home Truths,” and “When It No Longer Matters Where You Live.” In this trilogy, the poet presents art that defies frontiers. His poems engage as much of the Niger Delta world of Nigeria as of Spain’s Andalucia and elsewhere. Here is the real and surreal foraging of the imagination as the poet brings it to play in the emotional and the artistic. With lavish skill and wealth of words, Tanure Ojaide paints the “kingdom of songs” where “agony lives by ecstasy, tears by laughter, hate by love, and death by life.”

The “kingdom of songs,” which increasingly becomes aesthetic, human, and personal, “cares for fauna and flora and the entire earth” as it rails against exploitation, oppression, and the lack of freedom. It is an experienced artist’s canvas of the intricacies of life and the human condition. This collection is a matrix of images that flow inexorably in an exhilarating manner into a form of poetic exultation.

Tanure Ojaide has published a dozen books of poems, including Labyrinths of the Delta, The Fate of Vultures, The Blood of Peace, Daydream of Ants, and Invoking the Warrior Spirit: New and Selected Poems.  Educated at the University of Ibadan , Nigeria, and Syracuse University, Ojaide has won awards such as the Commonwealth Poetry Prize, the All-Africa Christopher Okigbo Prize for Poetry, the BBC Arts and Africa Award, and the Association of Nigerian Authors’ Poetry Prize. He is currently a Professor of African-American and African Studies at The University of North Carolina at Charlotte.